For those unfamiliar with it, Battle Cry is a boardgame set in the American Civil War, it's played on a hexed board using 20mm toy soldiers which are activated by drawing order cards.  Separate terrain hexes can be laid on the board to create an infinite variety of battlefields.   In need of some diversion from One Hour Wargames, and as Anthony had acquired a mat with 6" hexes, we opted to run a game of Battle Cry using 54mm toy soldiers (also I realised my ACW toy soldiers hadn't had an airing since the Gettysburg game in 2013).

The game also includes a number of scenarios based on actual battles showing you where to lay out the terrain features and the starting positions for all units.  We decided to refight the First Battle of Kernstown   This sees the Confederates under Stonewall Jackson inadvertently attack a much stronger Union force due to faulty intelligence.  Here's how the game went: 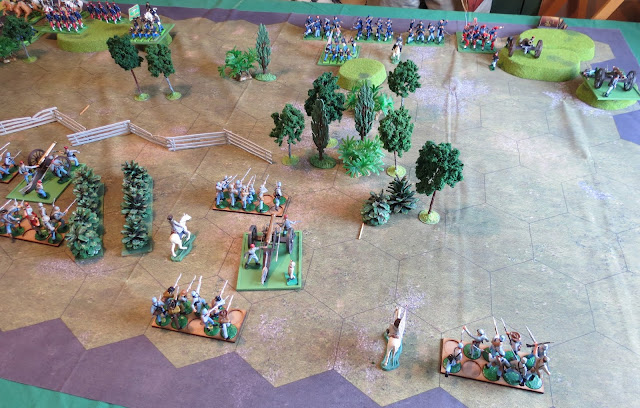 View of the left and centre of the field from the Rebel side.  The Union artillery dominates the Rebel left from the commanding hills in the background. 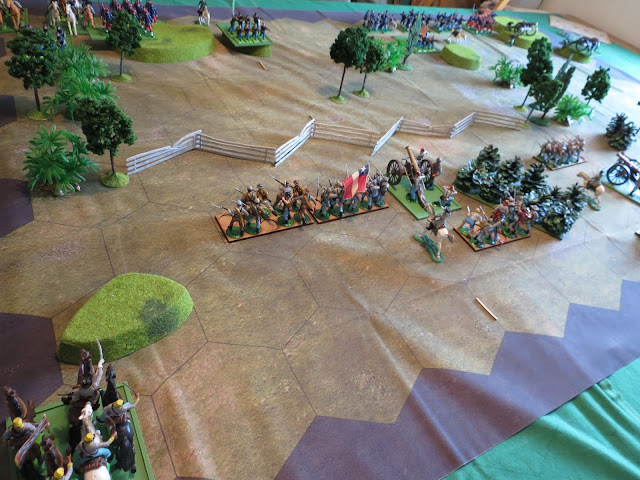 The Rebel right and centre, the picket fence running through the middle of the field provides scant cover but creates a clear psychological barrier and rallying point between the two forces. 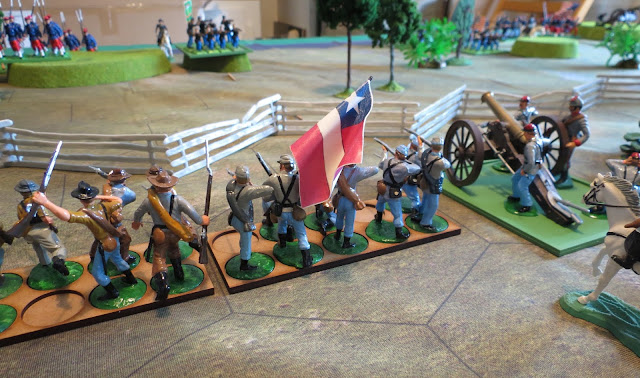 All movement and weapon ranges are measured in hexes rather than feet and inches, combat is between units rather than individual figures and is decided by simple dice rules. This makes for a fairly fast moving game once you've gotten used to the terrain effects, which are central to the system. 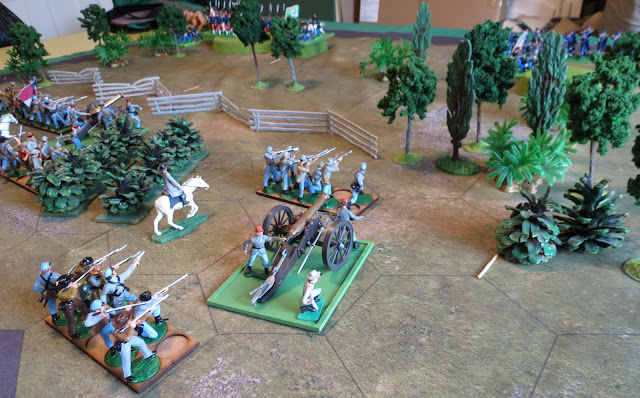 The Rebels hold a naturally strong defensive position, the treeline on their left protects that flank from the Union artillery and helps to even out the disparity in numbers between the two sides. 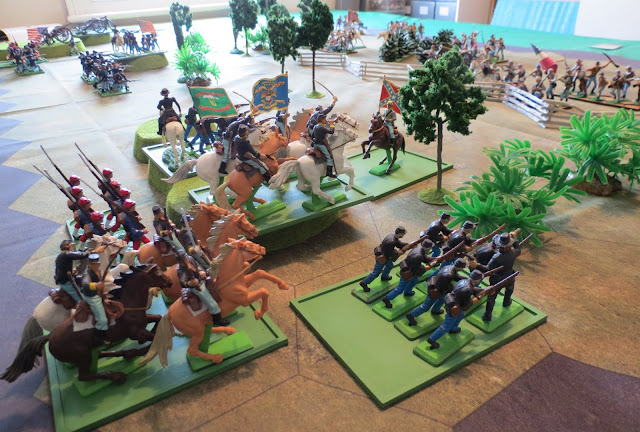 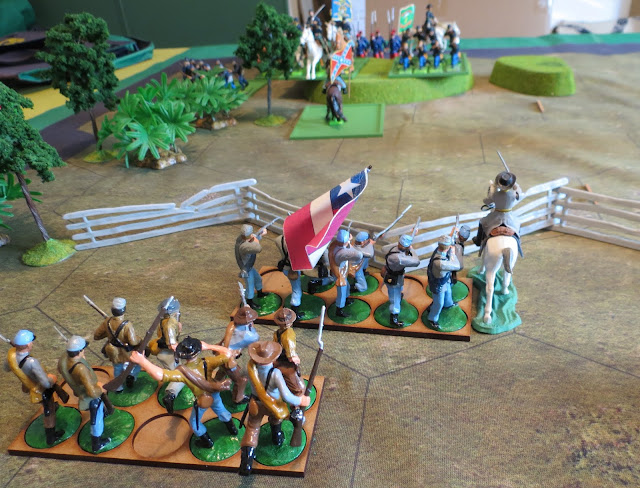 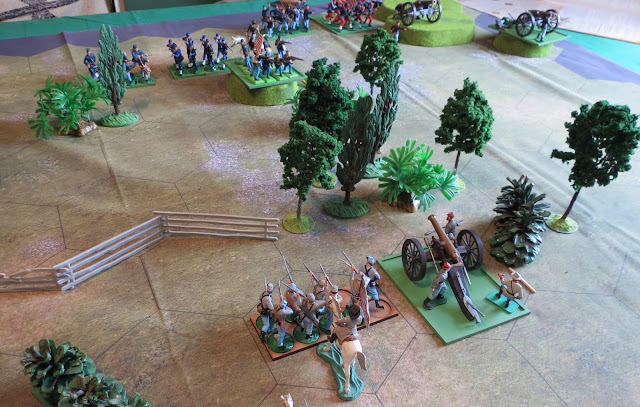 6" hexes are the ideal size for 54mm figures and give the game something of an old school Morschauser look.  If you don't want to stretch to buying a custom made mat it's easy enough to make one by cutting out a cardboard hex template and using it to draw around on a plain green sheet (if I can do it any idiot can!). 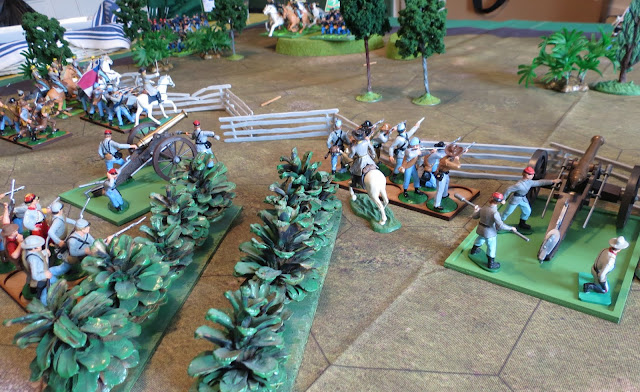 Most of the action was in the center and it could have gone either way as the relentless Union pressure took it's toll on the Confederates, finally a last desperate counterattack with a Rebel yell sent the Yankees running from the field. 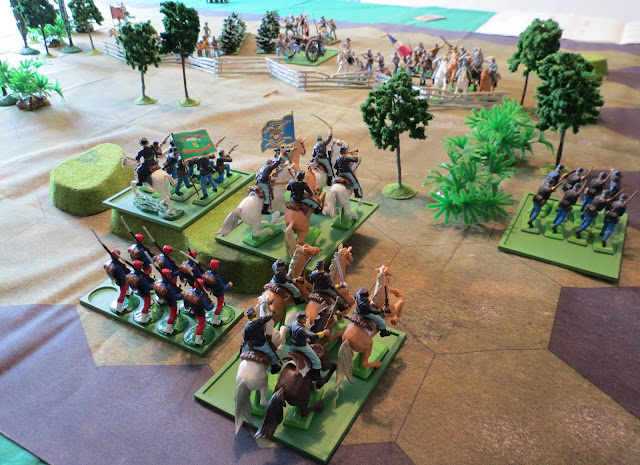 On the Union right a massed attack broke against the stoutly held fence line and suddenly the battle was over. It could have gone either way and the Union force was slightly ahead for most of the game but that changed after the attack in the centre broke.In 1862 the battle was a tactical defeat for Jackson and the Confederates but happily in 2018 they just about managed to hold their own!  The whole game took abut two and a half hours to play.

This system is ideal for use with 54mm figures and we feel this size of toy soldier adds much to the visual aspect of the game.  It can be used without alteration for any of the modern wars in the second half of the 19th century and I have a fancy to try it for a Crimean game sometime (a chance to get out those Britains hollowcast guardsmen in bearskins).  Another bonus with this system is the the order cards provided are ideal for randomising movement if you are playing a solo game (as we all have to sometimes).
Posted by Brian Carrick at 11:21