For several decades now I have been happily converting toy soldiers using the two part modelling compound known to all as Milliput, which does have it's limitations and sometimes causes a bit of skin irritation.  In the meantime, the rest of the world seems to have passed me by and moved on to using a similar product known as Green Stuff.  Not wanting to miss out, I wandered down to Games Workshop to see what all the fuss was about and bought some. 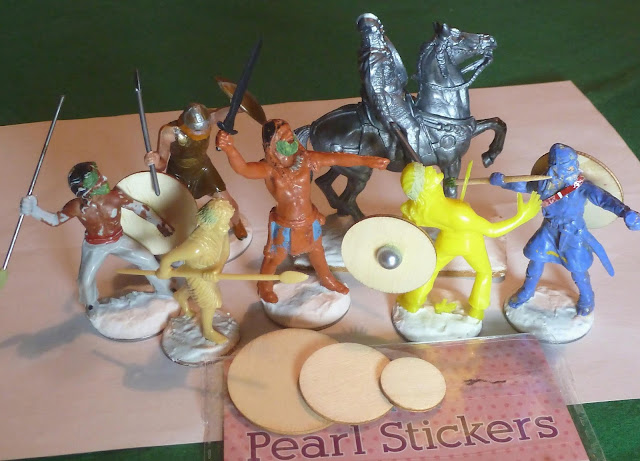 I spent much of last year basing and painting up just about every Viking, Saxon and Norman figure that I could find, so in order to get a bit of variety I started combing through the junk boxes at toy soldier shows looking for damaged figures to repair and anything that might be easily converted without too much effort.  My first attempt with Green Stuff was just adding beards and extra hair, nothing too ambitious!

In The Works (a UK book, toy and craft shop) I found some rather useful little wooden disks, they come in three sizes, the middle one is perfect for circular shields on 54mm toy soldiers, while the small one is good for bucklers etc and the largest I will use as an alternative to metal washers for bases.  The same store also provided "Pearl Stickers" I'm not sure what you are supposed to do with these but they are little half domes of plastic, sticky on the flat side, and perfect for making shield bosses. 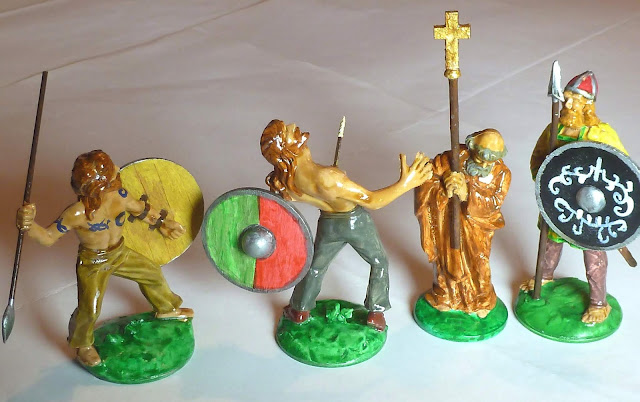 The look I was going for was a sort of generic Hiberno, Celtic, Pictish barbarian look.  The first two above started life as Indians in the Jean Hoefler (German) Wild West series, with feathers and trouser fringes trimmed off, then facial hair, shields and suitable weaponry added, the monk was a Hoefler nativity figure of Joseph who has had a crucifix on a pole added.  Finally, a Cherilea (UK) Saxon, who had lost his spear has been rearmed then given a shield and painted up as a "Wild Irish" noble. 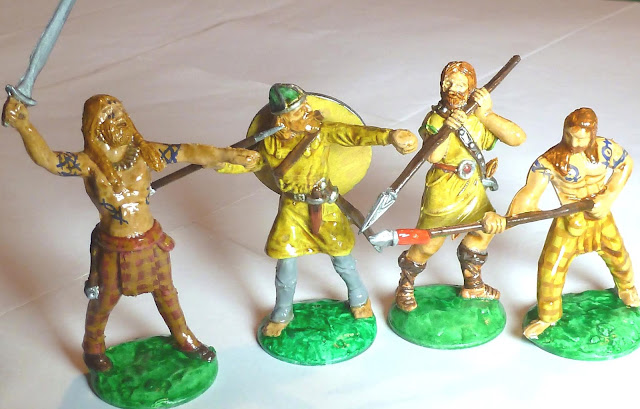 Another wild west Indian, this time by Cherilea, brandishes a new sword while hurling insults at the enemy.  A Cherilea Saxon archer who had lost his bow is now throwing a dart, a peculiarly Irish weapon of the time, the scar from the quiver trimmed off his back has been hidden under a shield which is hung on a strap cut from metal foil.  Next a REAMSA (Spanish) Viking is unaltered, just painted up to join the Irish warband.  The last figure is from a recent wild west set made in China, I think sold under the brand name Supreme, the rest of the range are really rather poor but I quite liked the pose of this one thrusting with a spear. 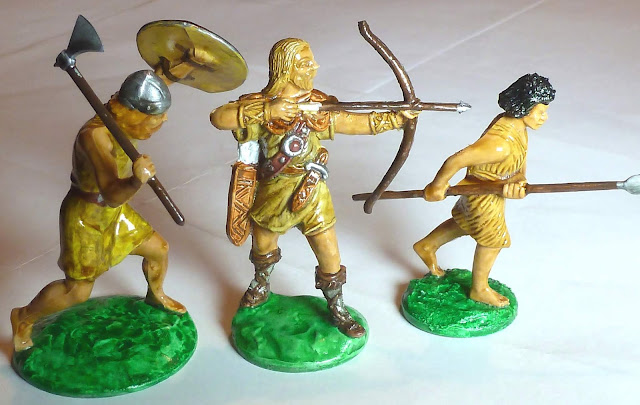 Three more recruits for the Irish warband, a Hong Kong copy of a Marx (USA) Viking has been given a long handled axe, another REAMSA Viking just given a paint job and a Beja Tribesman made by Armies in Plastic (USA) who is suitably barefoot and ragged to look the part.

Getting back to the Green Stuff, I found it easy to mix and easy to apply but it hardens much faster than Milliput so you have to work fairly quickly, I wasn't expecting that and I don't see how some modellers on other blogs can do such extensive and intricate work using it. I guess it's a bit of a learning curve but on balance I think I still prefer the Milliput.

This lot would never win any prizes in a modelling competition (not that I go in for that sort of thing) but I think I'll get away with it when they're all mixed into a horde on the wargame table.  At the end of the day it's all just a bit of fun...……..isn't it?