Limping back from Moscow

Somewhere in the deep expanse of Russia the Grande Armee of Napoleon I has begun the long march back to it's homeland.  A successful invasion had seen the most glittering army ever assembled in history, chase an elusive foe all the way to the gates of Moscow.  But then the snow began to fall........ 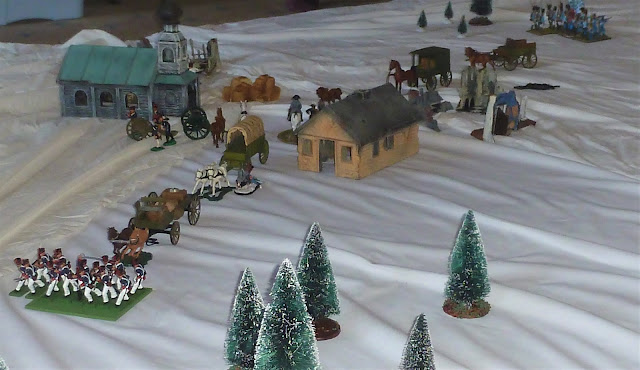 A French column is strung out on the march struggling through the drifts and eddies of snow, danger on every side form wolves, partisans and the dreaded Cossacks.  The slow lumbering wagons must be protected at all costs, they contain the food and ammunition essential to the survival of the army, not to mention all the loot plundered from the city. 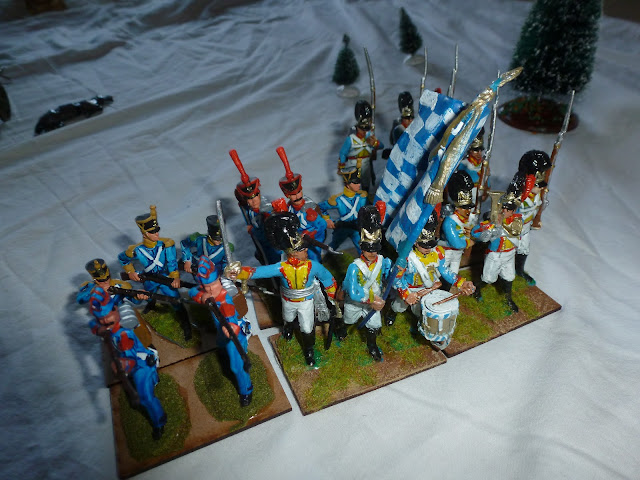 Much of the Armee is composed of foreign contingents pressed into the service of the Emperor, here the Bavarians show good order as they trudge through the endless bleak landscape. 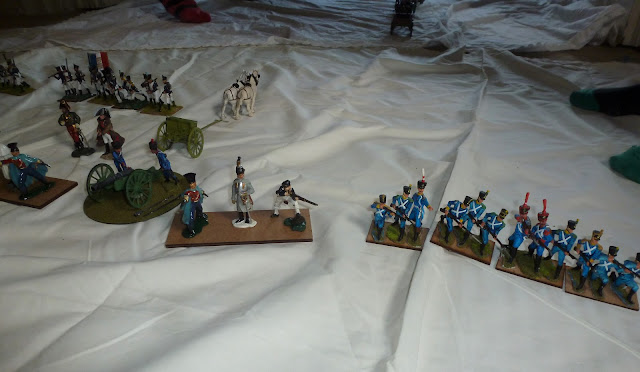 A French rearguard screens the column from the pursuing Russians, led by the redoubtable Marshal Ney, who is seen here on the left, conferring with Marshal LaSalle (quite amazing really, seeing as the later had been dead for three years by 1812, but history is a minor inconvenience when it comes to playing with 54mm toy soldiers!) 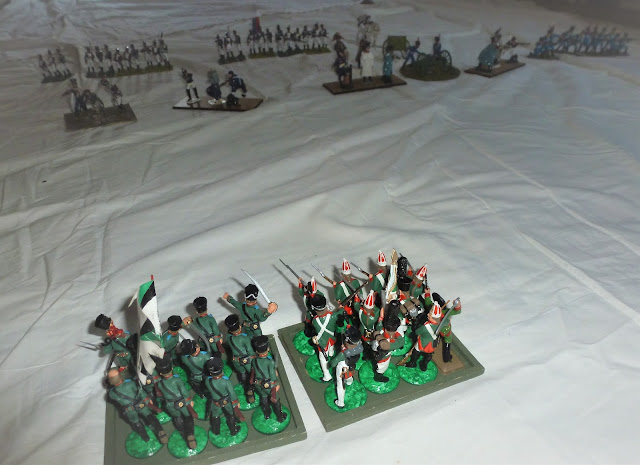 The well supplied, hardy Russian infantry catch up with the column and start to exert pressure on the rearguard. 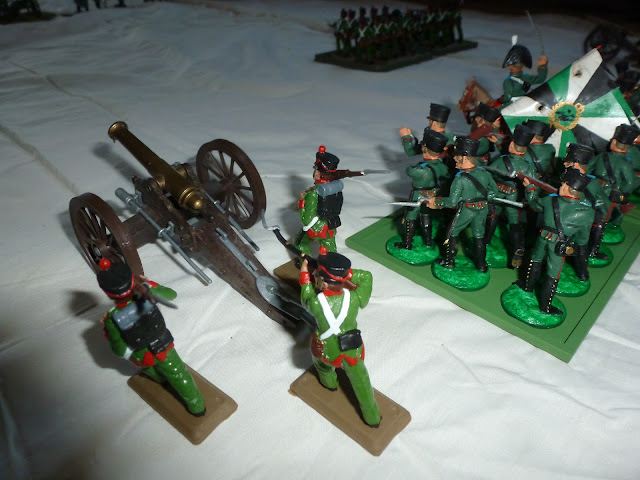 The Russians throw themselves at the French oblivious to casualties, buoyed up with vodka and inflamed with patriotic zeal. 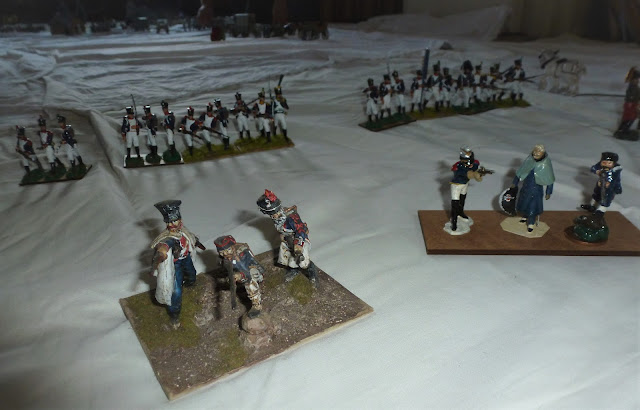 The French rearguard fall back steadily, contesting every inch of ground, selflessly sacrificing themselves to buy time for the rest of the army. 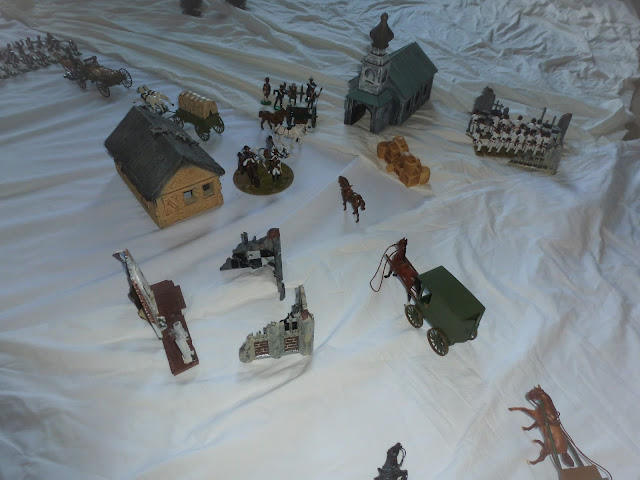 The column marches on but now stragglers are falling by the wayside with every turn. 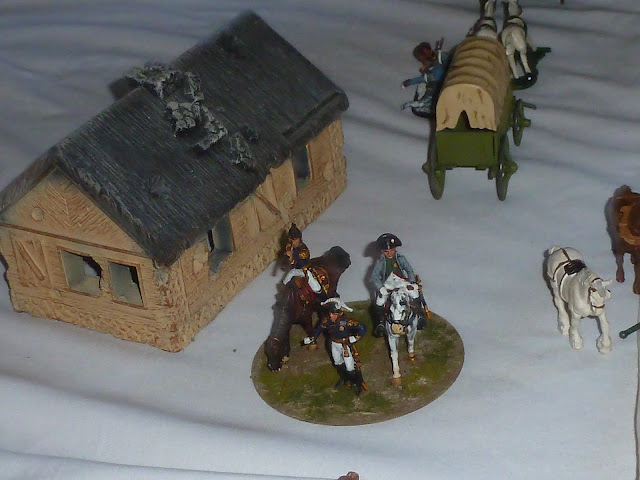 The Corsican ogre watches in dismay as his grand ambitions begin to unravel and his army starts to  rapidly disintegrate. 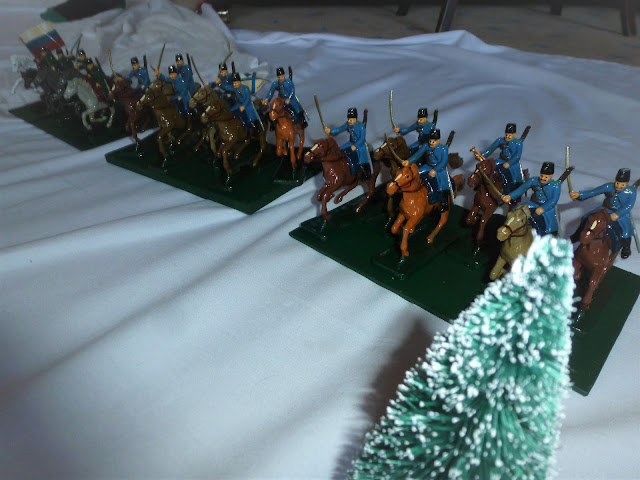 Lurking in the shadows and on the flanks are the ever present and watchful Cossacks!

It was originally going to be a quick game put together at short notice between a couple of players, but such is the enthusiasm of the Funny Little Wars aficionados that it quickly escalated to seven players pitching in a few hundred figures on a thirty foot snowscape.

Well what else are you going to do on a wet, windy Monday afternoon in London?