One Hour Wargames in the Dark Ages

With the Christmas break a distant memory it was time to get the new gaming season off to a start, and as Anthony had recently acquired a collection of Saxon and Viking toy soldiers made by Expeditionary Force of Singapore we had to give them an airing.  Here's how it went: 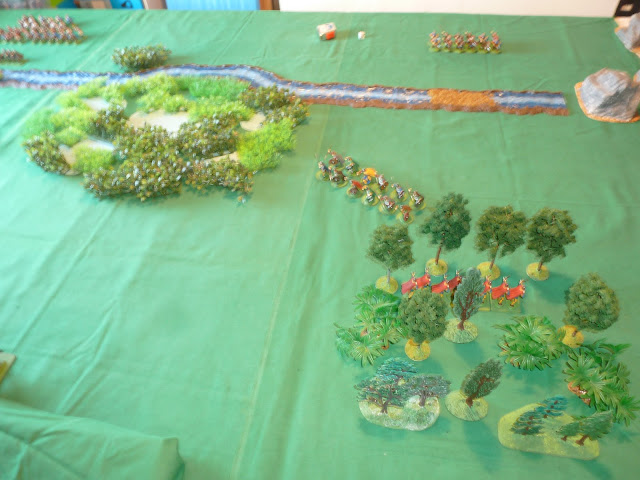 We chose to play Fighting Retreat, (scenario 20) from One Hour Wargames by Neil Thomas, which sees a small Viking warband falling back while delaying a larger force of pursuing Saxons, thus allowing the main body of raiders to escape to their longships laden with the plunder.

Above, the raiders have crossed the river and their skirmishers have occupied the woods ready to surprise the Saxons who are just approaching the ford in the river. 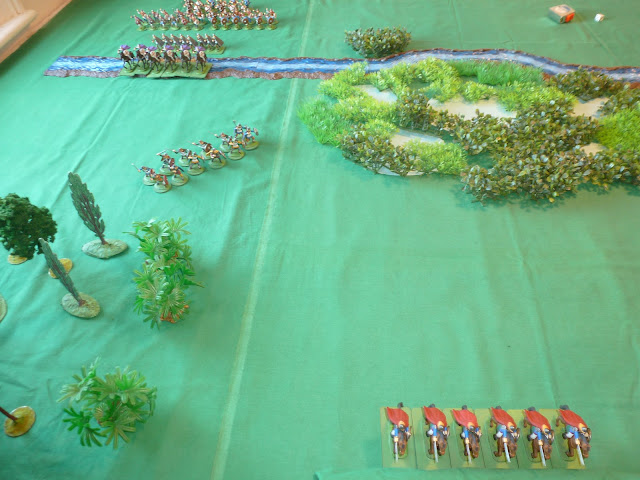 Here the mounted raiders are putting distance between themselves and their pursuers while the slower moving footmen, realising that they risk being ridden down, have turned and formed a shieldwall.

We have used this scenario before for a medieval game (OHW link on the right should find it), but this time it played out very differently.  The thing we like best about OHW is that it uses the same basic rule structure for every historical period, but there are subtle changes to how the rules work, within each particular period, to reflect the developments in weaponry and tactical practice as military science evolved. 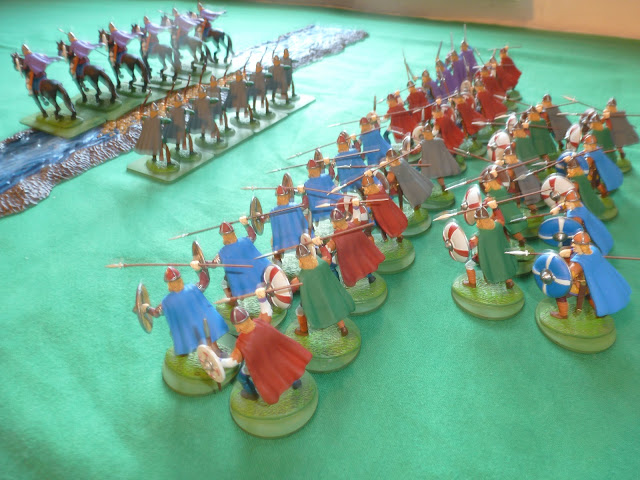 The Saxon host cross the river at the ford, cavalry in hot pursuit, followed by fleet footed skirmishers and finally the mass of infantry.

So the basic game is very quick and easy to master, but what intrigues us is testing out the effects of those subtle changes to see how well they reflect the chosen period.  In this case we found the unit movements were much more fluid and less formal than in the medieval period, also the skirmishers of these Dark Ages were much less effective than the bowmen of the later period.  But the most notable difference was the resilience of the infantry formed up in a shieldwall, which was very hard to crack. 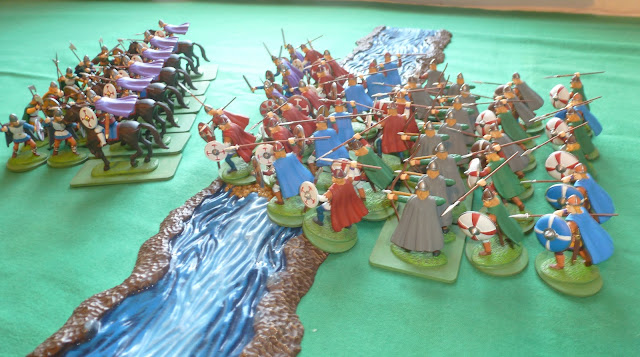 The Viking shieldwall braces itself for the impact of the Saxon cavalry, but holds without difficulty. The supporting infantry, following close behind, are forced into a bottleneck created by the ford and don't have enough room to manoeuvre around the melee.  Looks like I didn't think this move through  very well! 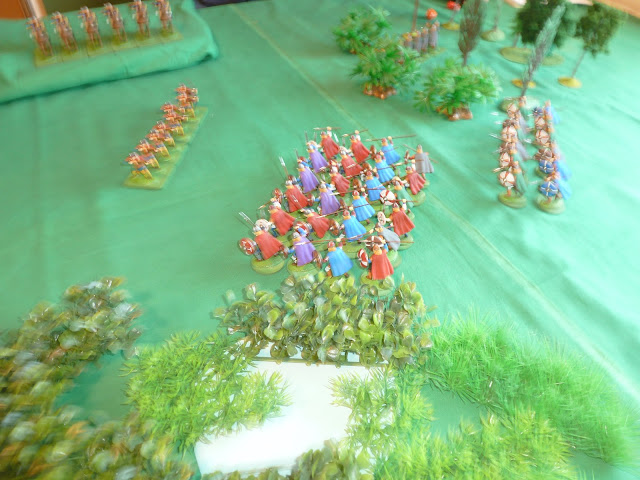 The Viking shieldwall has finally broken, but the Saxons have lost their cavalry and time is running out to prevent the raiders escaping, the Saxons surge forward and easily brush aside a unit of skirmishers. 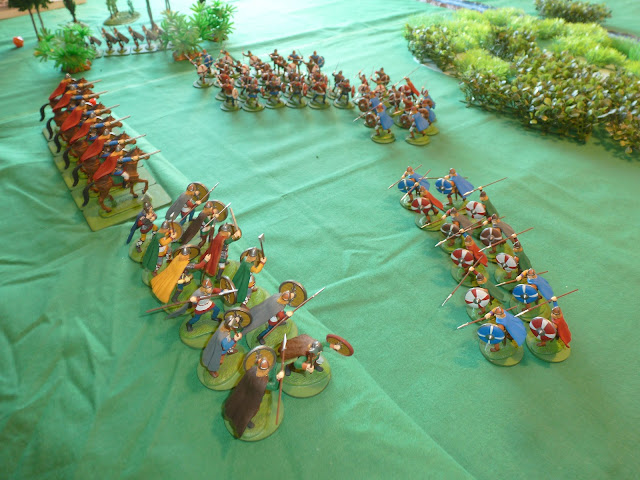 The Saxons form sheildwall and face the remaining Vikings, they realise that the main body of raiders are clean away with the plunder, and that they will be advancing uphill fighting at a disadvantage...........so they decide to pack up and go home for tea. 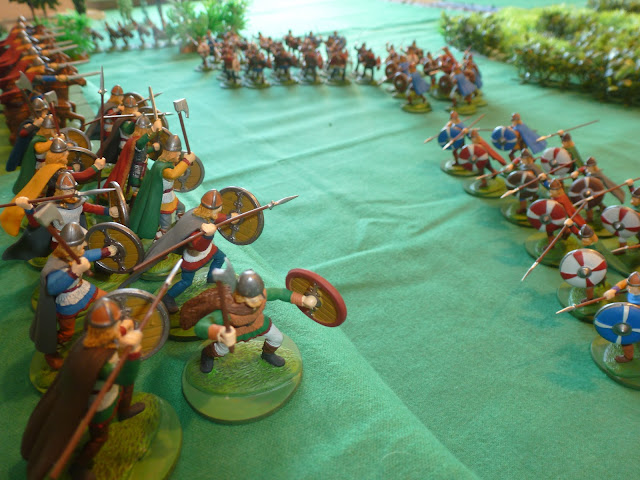 These plastic Expeditionary Force figures are described as 40mm but they are clearly bigger than that, we compared them against my 40mm Elastolin Vikings and they towered over them (should have taken a pic for comparison, sorry about that!).  They come factory painted in the neat flat style you see here, personally I would give them a wash of brown stain (which is what Elastolin used to do) to give them a bit more definition, but they're not my toys so that won't be happening.

Anthony has mounted them on circles of MDF which provides greater stability on the table and also give them more of an "Old school" look.  This is the full range here; cavalry, infantry and archers for both Vikings and Saxon, that's the full extent of the range, shame they didn't extend to Normans but as Expeditionary Force have now moved upscale to 54/60mm figures this may be all we'll ever see from them in this size.

These were the first range issued by Expeditionary Force and were aimed at wargamers, the sculpting is excellent and while the plastic weapons look rather fragile they are in fact very robust.  Just wish we could find some other ranges (plastic or metal) that would compliment them, A Call to Arms Normans are a little too large, while the old Kellogs/Rubinstein "Warriors of the World" figures are about the right size but they are limited to just one Viking and one Norman.  Ho Hum.