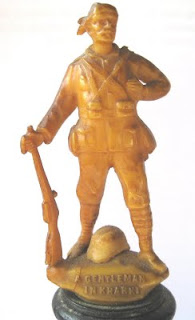 Based on the character in Kiplings poem The Absent-Minded Beggar I've been after this figure for a long time, they're not particularly hard to find but they are generally priced way beyond what I'm prepared to pay. There are two versions of the "Gentleman", the one here and another with rifle held across his waist at the ready. They were made circa 1902 which makes them probably the earliest plastic figures ever, although they were not made as toys for the juvenile trade but rather as ornaments for bottle stoppers. It's made from a hard rigid plastic often described as celluloid but I don't think this is correct as celluloid is paper thin, very fragile and wouldn't have stood up to much handling. The figure is hollow having been made in a blow mould - air under pressure is used to blow the plastic material into the mould and inflate it to fill the cavity where it sets hard on cooling and the mould is opened to release it, today this process is mostly used to make plastic bottles and containers. The vendor remarked "every collection should have one" and of course he is right, even though it's not strictly a toy soldier it is an iconic piece of contemporary (with the Boer war) folk art.
Posted by Brian Carrick at 07:06

Email ThisBlogThis!Share to TwitterShare to FacebookShare to Pinterest
Labels: Colonial