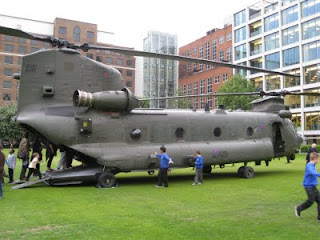 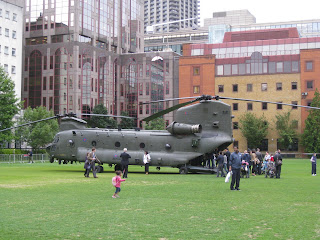 Last Wednesday Mrs C was flicking through her favourite blogs (like you do) and found this entry on Tired of London, tired of life
The Honourable Artillery Company is the oldest Regiment in the British Army and they were holding an open evening that day as a recruitment event but also to raise money for charity. This has now become an annual event and it is only on for 3 hours but entry is free and they certainly pack a lot into that short space of time. We arrived shortly after the doors had opened and there was already long queues at the food tents where free (donations gratefully acccepted) burgers, chinese noodles and mini pizzas were being served up, next to these was the beer tent. We did a circuit of the static displays, field hospital, survival equipment, ordnance vintage and modern but best of all was the Chinook, surrealy parked before the high rise offices of the City. 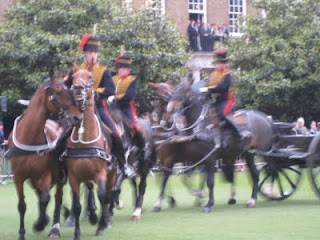 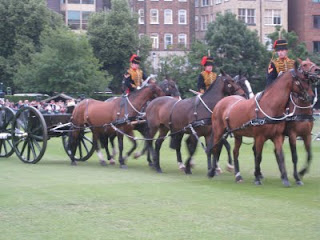 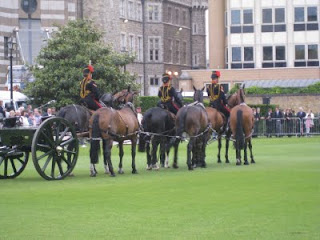 The programme opened with a display of exercises by the Kings Troop Royal Horse Artillery towing a 13lb gun, personally I never tire of watching them wheel those guns around. 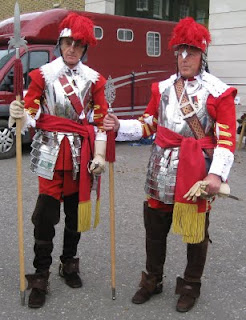 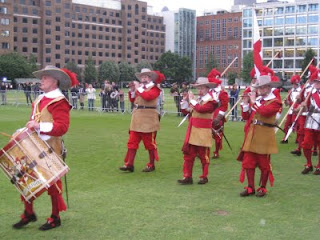 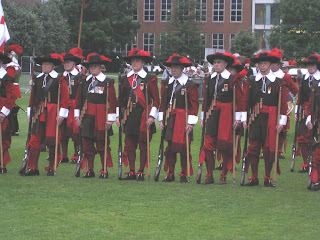 Next up was a display by the Company of Pikemen and Musketeers who provide the escort to the coach of the Lord Mayor of London during his Annual Procession, while the Lady Mayoress' coach is escorted by the Light Cavalry, below. 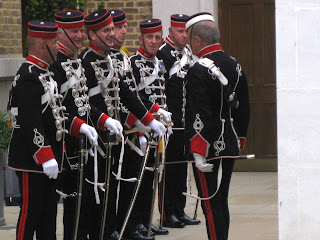 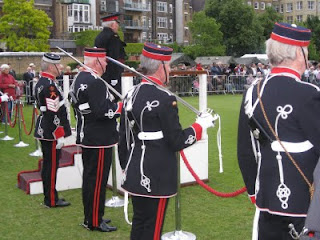 The HAC is a Territorial (Reserve) Regiment of the the British Army which specialises in surveilance and target aquisition for the artillery, members of the Regiment have been mobilised for service in Iraq and Afghanistan. Next followed two displays by No. 2 squadron, the first was set during the Boer War and involved calling up the guns to support infantry ambushed by a Boer Kommando. The second was a similar scenario set in modern day Afghanistan. Both displays involved lots of explosions and much smoke, I love this kind of thing. 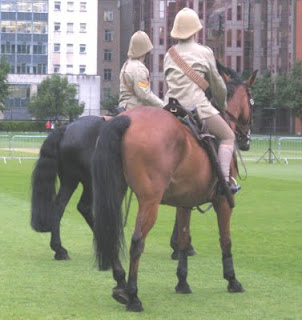 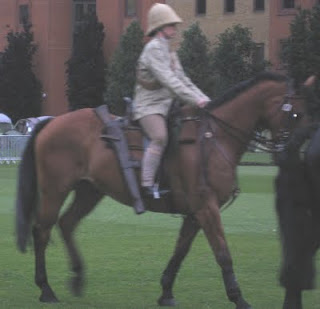 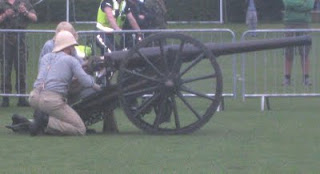 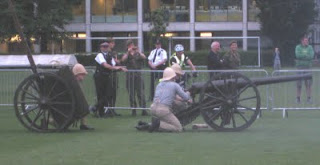 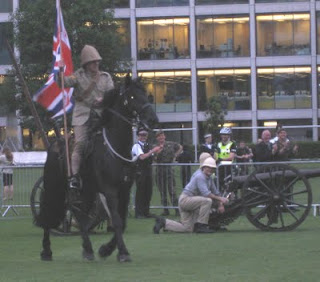 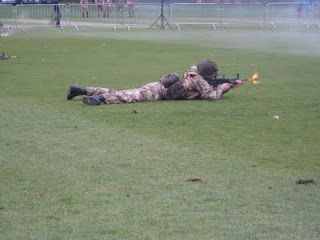 By now the dusk ws settling in and with all the smoke let off visibility was poor but we were reaching the finale of the event, the Band of the HAC came on wearing the uniforms of the Grenadier Guards, with whom they are affiiliated, followed by the take off of the Chinook from which there was to be a parachute drop. 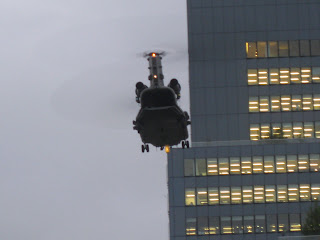 The Chinook hovered above us for an age looking like a big dark malevolent bee. 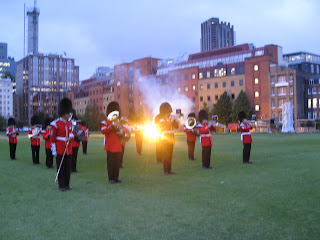 The band struggled valiantly to be heard above the noise and wind from the Chinook rotors as it took off, a flare was set off on the ground (behind the band above) to guide the parachutist back to the field. Unfortunately the sky was so overcast, the ground shrouded in smoke and the wind so strong that the crowd held it's collective breath as we watched the parachutist carried away into the streets and office blocks of the surrounding district. Some time later the lone parachutist strode back into the arena, carrying his unfolded chute, to a rapturouse applause from the crowd.
Posted by Brian Carrick at 07:58

Email ThisBlogThis!Share to TwitterShare to FacebookShare to Pinterest
Labels: This and That