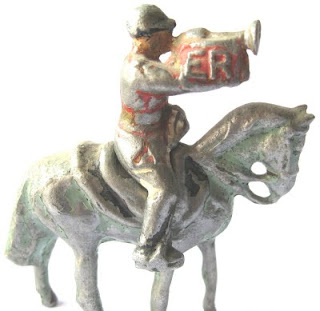 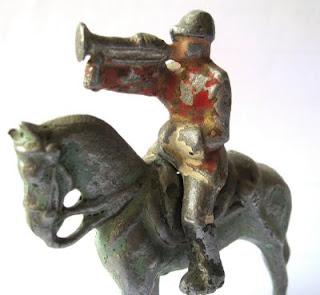 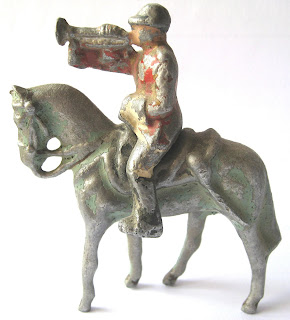 This mounted trumpeter of the Household Cavalry was given to me in 1960, it may not have been the very first toy soldier I ever owned but it is certainly the one that has remained in my posession the longest. It was made in England by Wendal, it is aluminium and is 54mm scale. Aluminium figures were very popular in post-war France but never realy caught on elsewhere, the only exceptions I can think of are Krolyn of Denmark who made copies of Elastolin as well as some original designs in this material and Wendal who made copies of Quiralux figures. Quiralux were the market leaders in manufacturing aluminium toy soldiers in France.

Aluminium figures are made by slush casting a process whereby the master model is pressed into compacted damp sand, then removed and the molten aluminium is poured into the resulting cavity. To make a two part mould the sand is packed into two steel trays which are then "sandwiched" around the master model. When I was at school we used to do slush casting in metalwork lessons, no health and safety worries back then! The limitations of this casting process means that aluminium toy soldiers tend to be less animated and detailed as those made in other mediums, the material is also very brittle and I have yet to find a way of repairing a broken item.