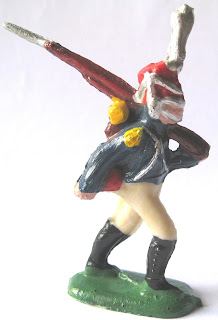 This is the last of the collectable figures I picked up at last week's PW show, not a large haul considering the amount of esoteric stuff there to be had but the truth is that before very long I started to suffer from toy soldier overload and became incapable of rational thought. I had taken a shopping list to the show, mostly items I wanted for conversions to supplement the armies I'm building for the "Funny Little Wars" project but immediately abandoned that and bought us stuff tht was totally off list.

This figure was made in Poland, I presume by PZG (Polski Zwiacek Gluchych), the Polish Union for the Deaf, who ran workhops manufacturing all manner of things to raise money for deaf people. The organisation still exists today but no longer makes toy soldiers, this example is 54mm plastic. Collector Jim Lloyd is probably the leading exponent of PZG figures in Western Europe and has a website well worth looking at here.
Posted by Brian Carrick at 09:50