Back in about 1966, so when I was 10, my dad decided to build a new wall for the front garden of our house in Chiswick, West London.  In digging up the area to lay the footings he unearthed a Royal Horse Artillery cap badge, 2 live rounds of .303 ammunition and a white plastic toy soldier of a highlander standing at ease.  How this cache came to be there is anybodies guess.  Now if I'd found a couple of live rounds I would immediately hand them over to the police but for reasons best known to himself  my dad decided to store them in the cupboard under the stairs next to the gas meter! but the important thing is that I got the cap badge and the highlander.

By that time I was already an avid collector of plastic toy soldiers and was well versed in the products of all the major UK manufacturers but I'd never seen anything like that highlander, he'd lost his base and rifle, he wore a quirky uniform almost Crimean but certainly pre WW1 and was very well detailed.  I always felt there was something special about him but it would be another ten years before I was able to confirm that he was made by Malleable Mouldings from a design by the sculptor Holger Eriksson for Authenticast, a firm in Galway, Eire (where my dad was from).  That was the start of an ongoing love affair I have had for the works of Eriksson, a most prodigious sculptor for Comet, Authenticast, Malleable Mouldings, SAE (Swedish Afrikan Engineers), Spencer Smith, Prince August and his own Connoisseur range. 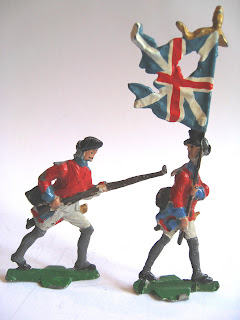 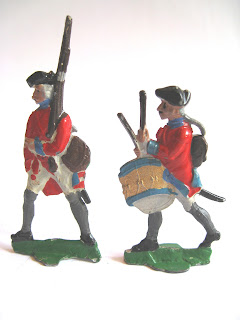 In the never ending tidy up of my toy soldier room I unearthed this old box of Authenticast 40mm semi flat figures of British infantry from the 7 Years War.  On the base they are marked Eire and a number has been scratched on each one but there is not the distinctive HE found on the majority of Authenticast's 54mm figures, denoting that they were designed by Eriksson.  Of course HE wasn't the only sculptor for Authenticast and it may be that they simply didn't mark the smaller sized figures so perhaps we can only go by the general style, which I would say is very HE particularly the man advancing at the ready which has that "purposeful stride" so typical of Eriksson. 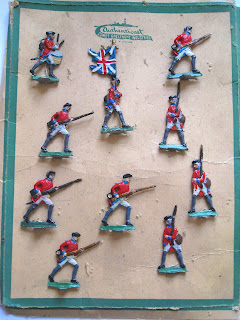 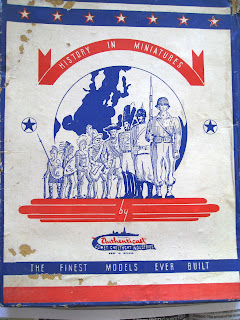 Despite the fact that they were in production for a relatively short time Authenticast 54mm figures are fairly common but these smaler semi flats are much less so, I have one other set (which I'll post up in a day or so) and I recall seeing a box of Napoleonics at a Phillips Auction about 15 years ago and that's about it.  The other box that I have is identical except that it carries the original price: 2/11 (two shillings and eleven pence. which for those not conversant with British pre-decimal currency would now be fourteen and a half new pence) 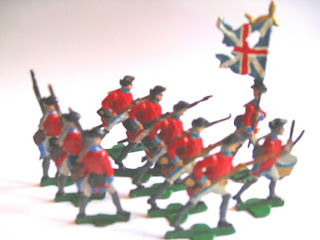 The standard bearer has his head turned to look back at the rest of the troops, a small detail that adds to the charm of the set.  Were they the forerunners of the Prince August range?  It's possible I suppose, these are much thinner than the PA figures.
Posted by Brian Carrick at 08:45