Q. When is buying junk you don't need or want acceptable?

A.  When you can honestly claim that it's actually a contribution to charity.

Growing up in London in the 1960's I recall that every town had a cluster of "antique" and "junk" shops wherein the Faginesque owners scratched a living haggling up the price on stuff they had acquired for nearly nothing.  Today they are all gone, where did they go and when did it happen? I don't know, but their place has been taken by a new burgeoning industry, one that is impervious to recession, the Charity Shop.  Do they have such emporiums in other parts of the world?  I have fond memories of "thrift shops" in the US when I visited back in the 1970's, were they the same thing? or is it just us Brits that have so much excess stuff we don't need but can't bear to throw away that we sooth our collective conscience by donating it to charity?

Now I'll be the first to put my hand up and admit that I've never been known for my philanthropy but there is one charity that I regularly support called PAWS which seeks to reunite lost pets with their owners or otherwise rehome animals.  Our local branch is run by two nice ladies who invariably get stuck with the pets no one else wants, the ones with only three legs or no tail. and for that they deserve my support at the very least.  They also run probably the most interesting charity shop in town, which I never pass without popping into and where I found this........... 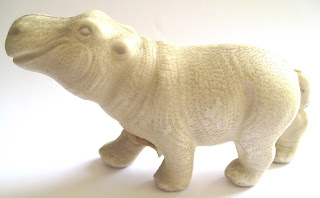 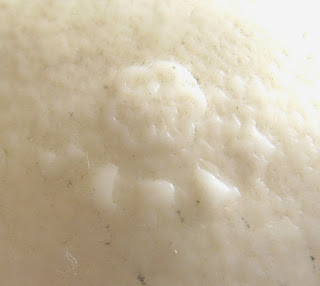 It's a hippopotomous, a rather stylised Japanese smilling hippo but what was interesting to me is that it's made of celluloid, which is a little unusual.  Celluloid is not an ideal material for making toys, in this case the plastic shell is thinner than you would find in a ping pong ball but the figure has been filed with plaster to give it support.  I already have a few pieces in celluloid, some toytown style guardsmen in bearskins plus a squadie in khaki battledress, the latter is also filled with plaster.  Celluloid figures mostly tend to be made in Japan, all of the above are, the hippo and the squadie are both marked with a chrysanthemum flower and the word JAPAN underneath, you can just about make it out in the second picture, and I think these probably date from about the 1950's.  I have seen Japanese celluloids marked "made in occupied Japan" which I guess would date them a bit earlier, maybe the late 1940's.   I've also seen larger size (maybe 120mm) toy soldiers that were made in France during the 1920's in celluloid and I have a few smaller animals from France or Germany, one is marked "Loris" but I know nothing more about them at this time.
The hippo has a broken right foreleg which has been very badly repaired, rendering it valueless as a collectable, would I have bought it if I'd seen it at a toy soldier show?  Probably not but I am very happy to have been able to salvage him to a place among other celluloid toys and at the same time made a donation to my favorite charity.
In recent weeksI have been running a "play by email" wargame set in the Russo Turkish War using the "Big Wars" rules devised by veteran wargame author Stuart Asquith and Jack Alexander.  I've never done anything like this before (by email I mean) and it has worked quite well so there will no doubt be reports on several of our blogs in the not too distant future.  Either way, next post will be back to toy soldiers.  Promise.
Posted by Brian Carrick at 10:31