The Battle of Astrakhan (part 1) – A RussoTurkish wargame with toy soldiers.

Back in 1993 veteran wargamers Stuart Asquith and Jack Alexander published a set of rules, called “Big Wars” for use with 54mm toy soldiers after the style of H G Wells “Little Wars”.   Big Wars retained the simplicity of Little Wars but introduced mechanisms that would be recognisable to the modern wargamer of smaller scale figures.  Over on the FunnyLittleWars Yahoo Group messrs IJ and AG began a discussion about Big Wars and I offered to umpire a game between them to try out the rules for a bit of fun. 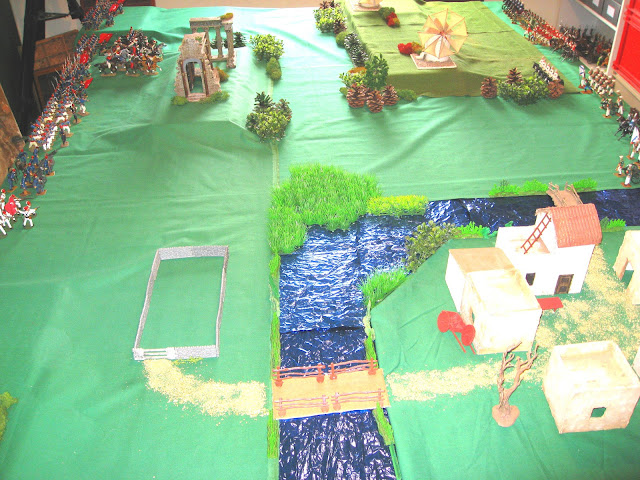 The umpires overview of the table 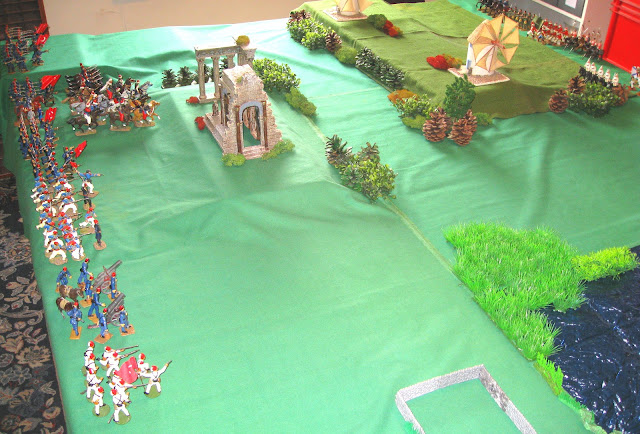 The initial dispositions, the Turks have concentrated to the south west of the field behind the cover of low hills and the ruins of a temple from an earlier civilisation.

The plan was that I would set up a terrain on my games table and allocate armies to each player.  H G Wells used to play his games on the floor and would rig up a curtain to go across the room so that each player could not see his opponents opening dispositions.  To emulate this I emailed Ian and Alan with photos of what could be seen at table top level from different points along their respective baselines.  The table measures 8’ x 6’ which we split into 6” squares annotated 1 to 16 along the length and A to L across the width so that the players could instruct me where to place their opening dispositions. 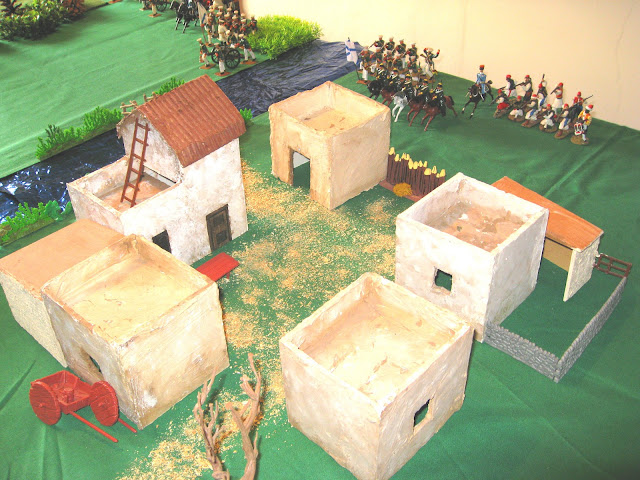 To the north east the Russian forces prepare to occupy what appears to be a deserted village.

Infantry are formed in units of 10 plus officer and standard bearer, Cavalry comprise 5 troopers plus officer and an Artillery battery is 1 gun plus 4 gunners.  Each 6” square can accommodate two units of infantry or one of cavalry or one battery of artillery.  Infantry and artillery must start in a square on line A while cavalry can start from line A or B.  Units can also start off table but the player has to specify on which square they will enter the table. 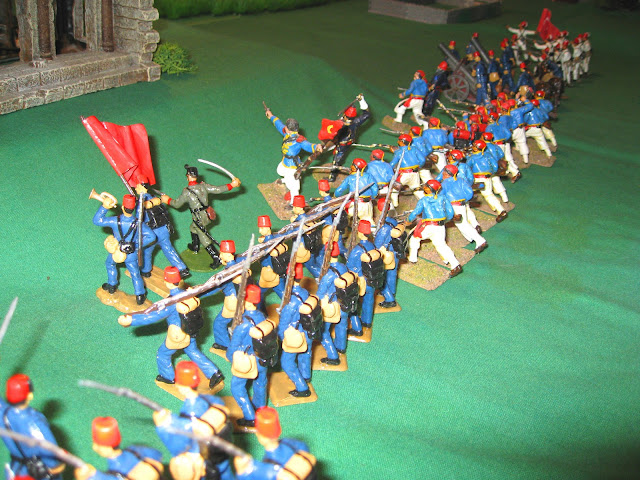 The Turkish line begins it's advance

The background to the game is that the main campaign in the mountain passes of the Balkans has bogged down into siege and trench warfare around the city of Plevna.  To break the stalemate the Turks have sent a force over the Caucasus mountains in a raid to sweep across the Caucasian Plain, moving fast on a broad front living off the land and destroying everything in their path, emulating Sherman’s march to the sea during the American Civil War. 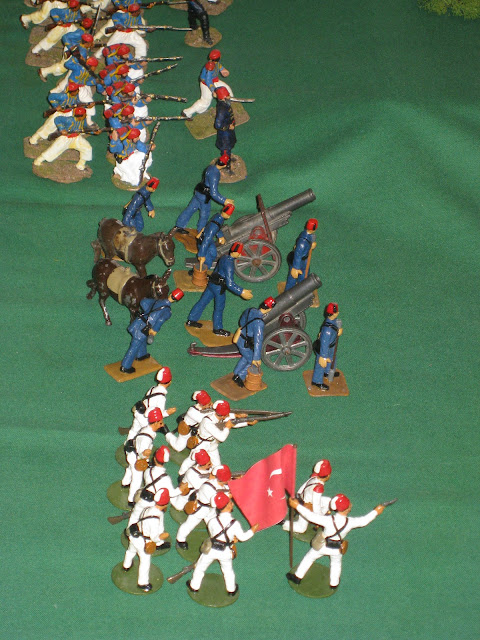 The Guard infantry, mountain guns and Naval contingent are deployed to the right flank.

Supported by mountain artillery, without any expectation of resupply or reinforcement their orders are to avoid pitched battle, march north in a feint towards Rostov then turn east avoiding Tsaritsyn (Volgograd) to attack Astrakhan from the landward while a naval flotilla makes a co-ordinated attack from the Caspian Sea.  Attached to the command are a group of Prussian advisers, veteran officers recently released from service after their victory in France, and a Naval contingent who will provide liaison with the flotilla for the attack on Astrakhan. 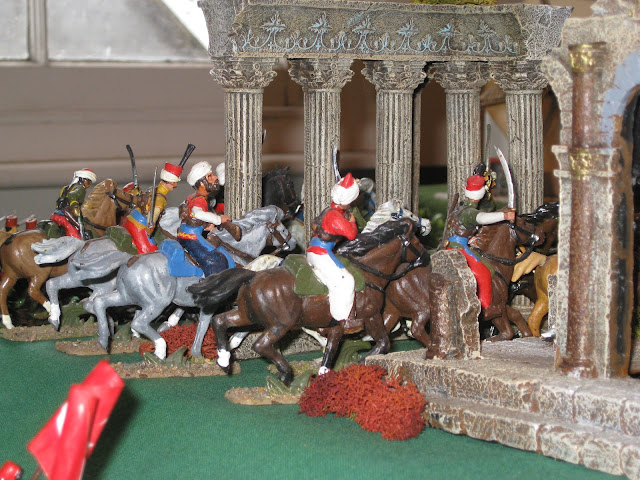 In the centre the Turkish light horse move to the crest of the hill.

The raid has two objectives, the first to draw enemy troops and resources away from the main theatre in the Balkans, the second to encourage a rising of the Kazakh and Uzbek cities of the Khiva Khanate, who have suffered the humiliation of Russian conquest in recent decades.  The capture of Astrakhan would provide a forward port through which they could be supplied with arms, the Cities are opportunists who will only back the winning side but it is hoped they will heed the call to jihad by their coreligionists but if that does not succeed the expedition will revert to bribery, it carries 30,000 pieces of gold provided by the British and American Governments who will are pleased to assist in any mischief which may cause the Russians some difficulty. 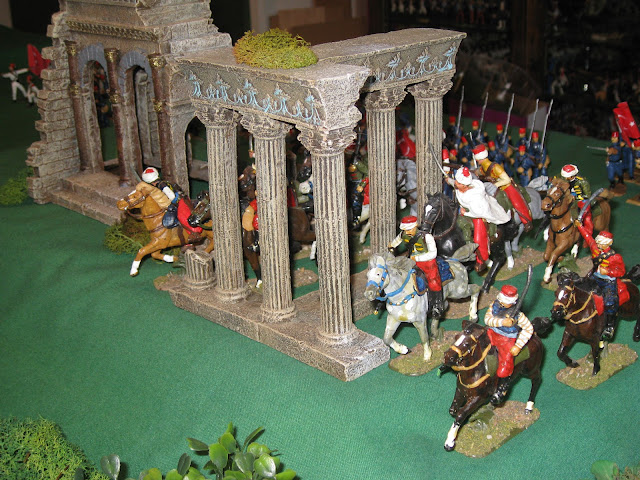 Tomorrow, the Russians respond.
Posted by Brian Carrick at 12:30