The Battle of Astrakhan (the end)

Continuing the battle played by email with 54mm toy soldiers using the "Big Wars" rules devised by Stuart Asquith and Jack Alexander, this is part 6 of 6 instalments so if you have just joined us dear reader you may wish to start reading at Part 1.

Click on the pictures to enlarge, click again and they're even bigger!
Players notify their orders by email, the moves are then carried out on the tabletop by the umpire and the results are returned to the players by email photos. 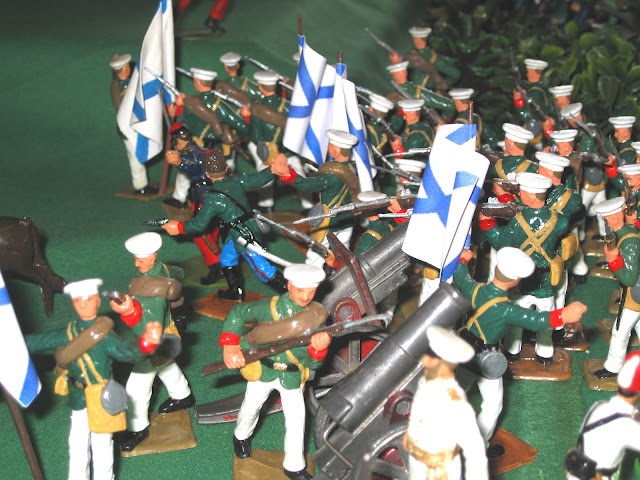 After suffering under a punishing hail of fire, the Russian sledgehammer has broken through the Turkish line...... 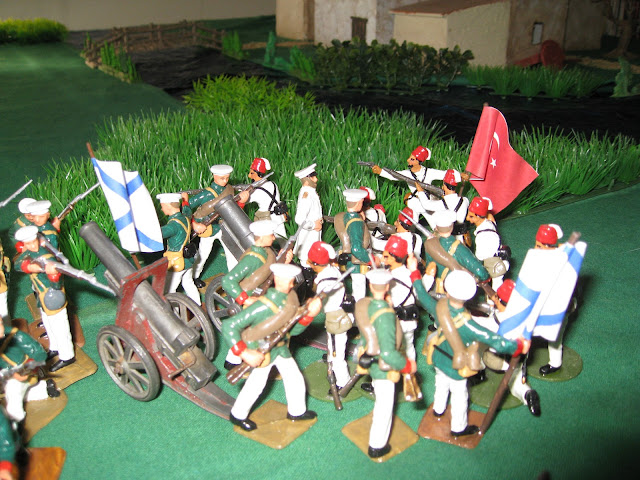 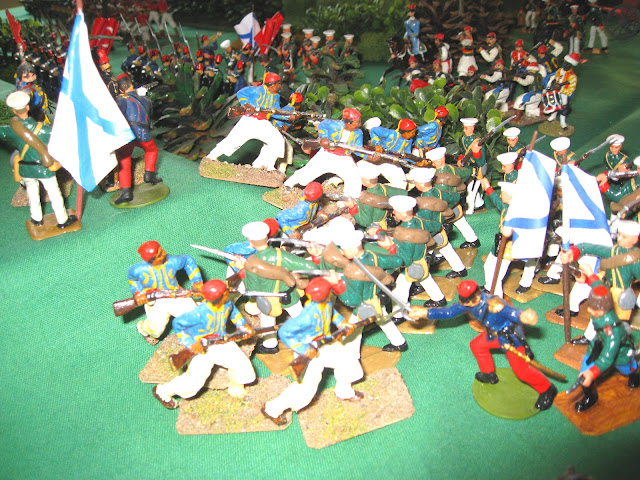 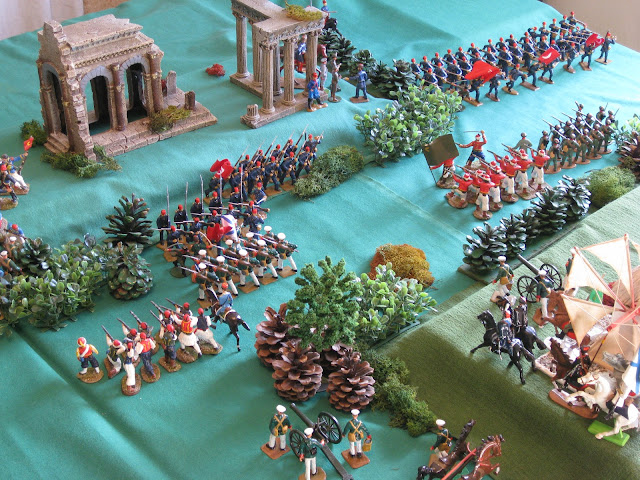 The entire Turkish line advances on the thinly held Russian right wing. A Line Regiment and the Albanians have been marched in oblique order to shield the guns and the Command from the new threat......... 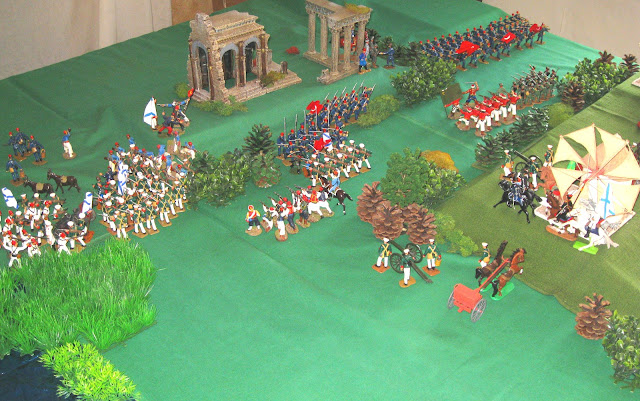 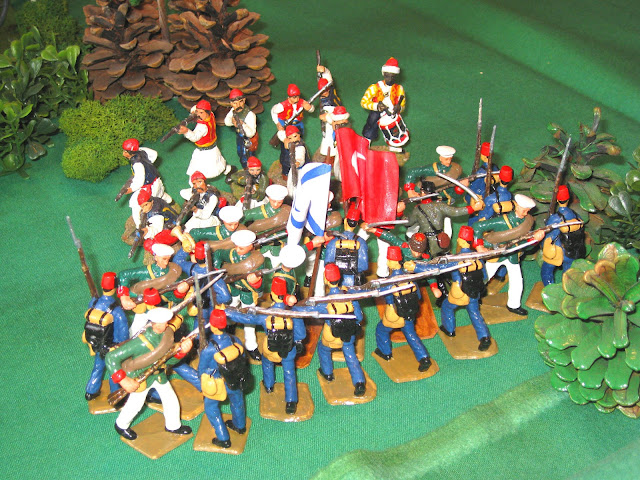 Another melee breaks out in the centre 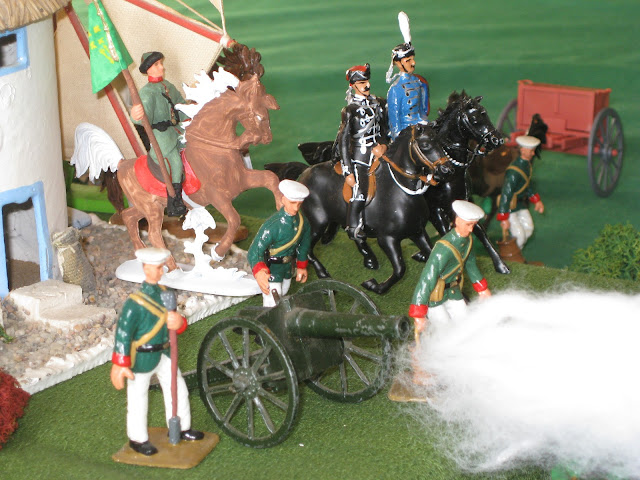 The guns maintain their fire on the enemy line but it has little effect. 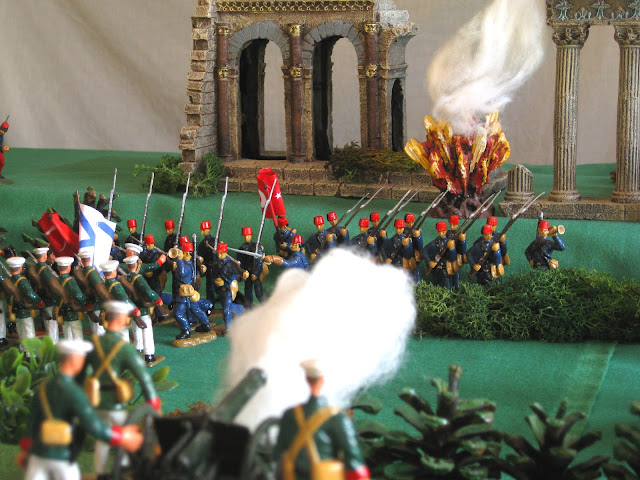 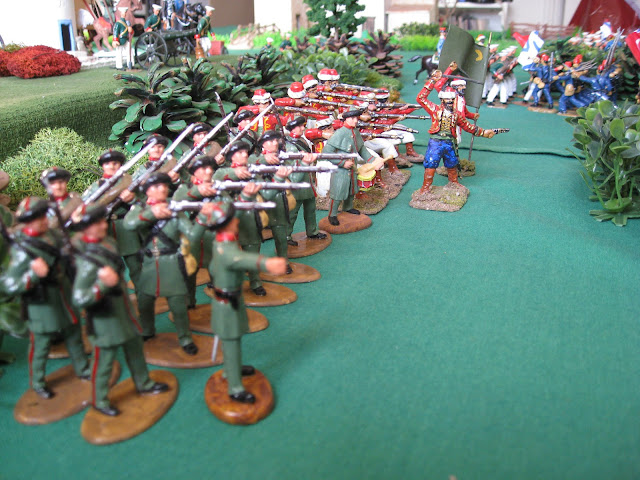 The Montenegrins and Rifles dress their lines and steady themselves to deliver a volley. 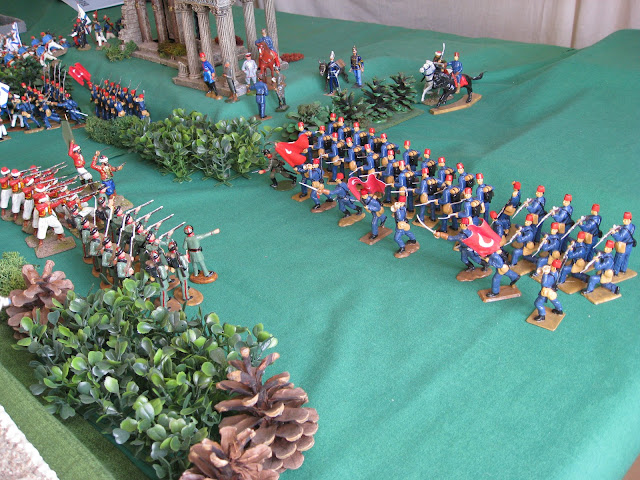 The Turkish advance is set to envelope the Russian line on both flanks. 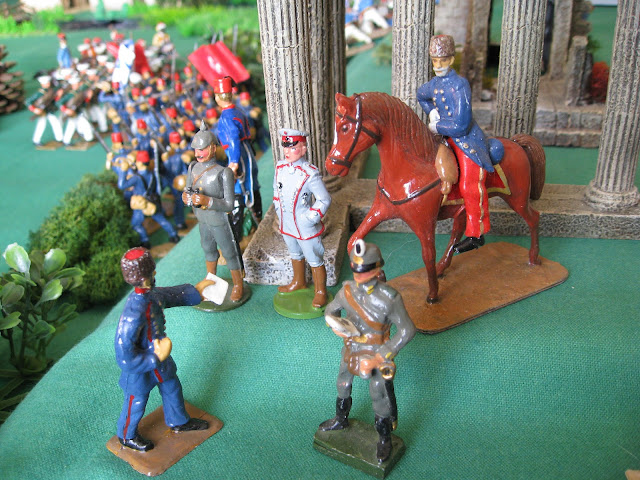 The Turkish Staff discuss their options with the Prussian advisers. 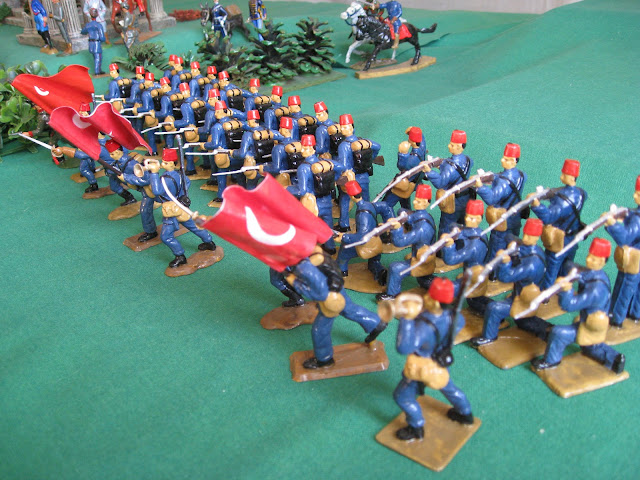 Each unit of 10 infantry has an officer and a standard bearer, the players get a very limited view of the battlefield from the photos they are sent and also do not know the size or composition of the forces that oppose them.  The standards are quite visible in the photos and aid the players to keep track of where friendly forces are and assess the size of opposing formations.  When removing casualties during the game I have retained the standard bearers on the basis that if they were hit another man in the unit would pick up and run with the flag, thus continuing to aid the players with unit identification.

The only rule for morale in  Big Wars is that when a "unit falls to one figure under half their original strength they must retire"  I didn't think of it a the time of the game but going forward I plan to use the officer figure as a unit casualty marker - in the example above, when 5 of the rank and file have been removed, the 6th casualty will be the officer, a unit with no officer will thus retire.  If there should be a 7th casualty inflicted it will be the standard and the remaining men will then break and rout

Also going forward I would like the Staff to have a more active role than eye candy so may allow them to rally retiring units and combine them to make reformed composite regiments. 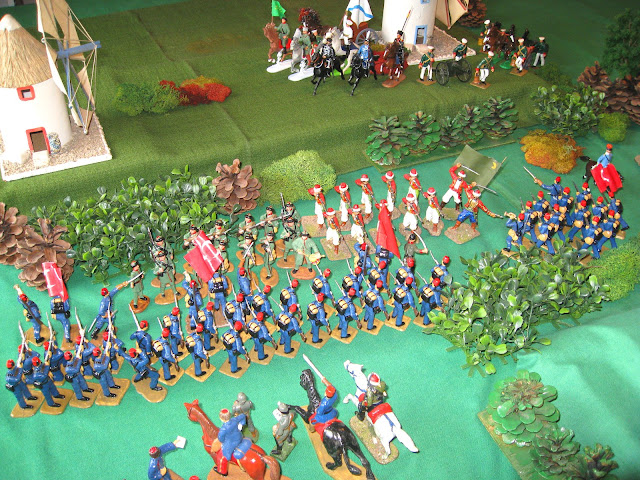 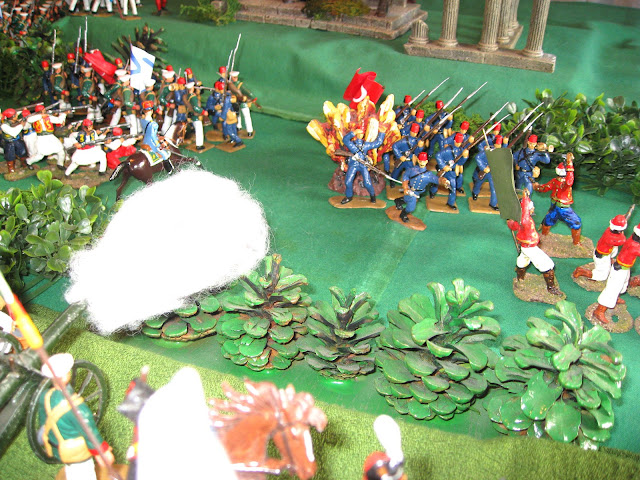 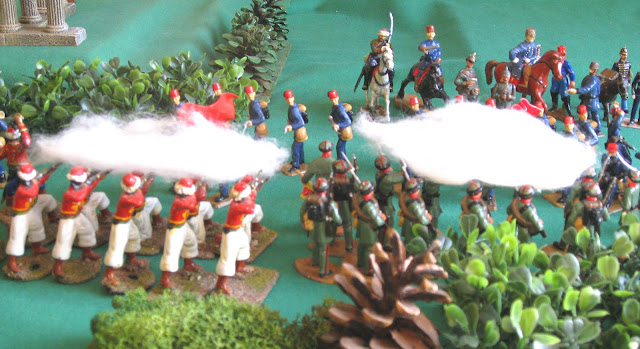 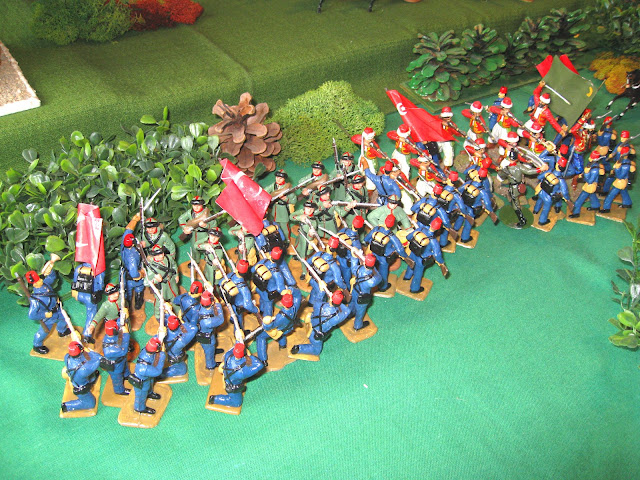 ........but they charge home and fall on the enemy with the bayonet 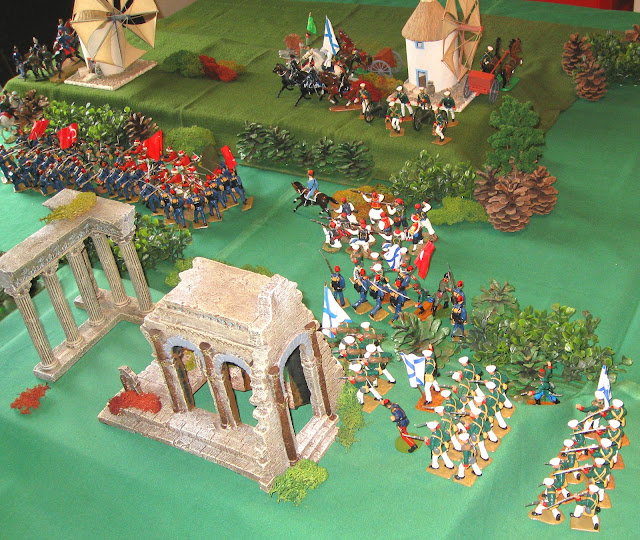 The overall view shows the Russians attempting to role up the Turkish line while desperate melees continue in the centre and on the left.  Meanwhile the Turkish staff take the opportunity to slip past on the road to Astrakhan with the gold. 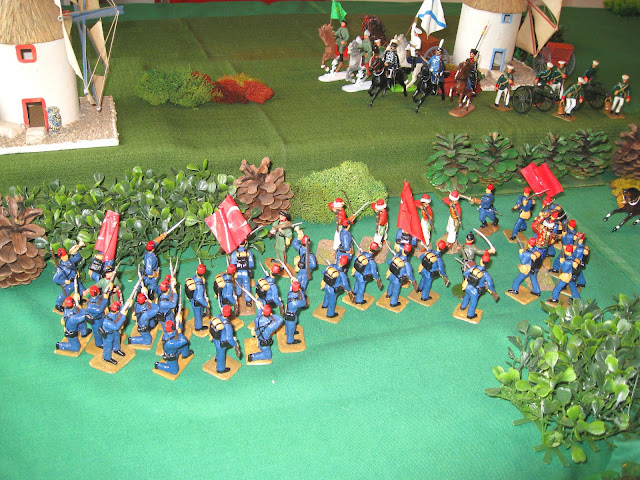 Finally, the Montenegrins and Rifles have been overwhelmed by superior numbers.  The remaining Turkish infantry form up to fight a rearguard action and follow their officers on the road to Astrakhan.

Umpire's note.
The introduction scenario would have made a good Campaign and even now could be continued, with the loss of so many troops and their artillery the Turks may not have the strength to take Astrakhan but they still have the gold so could recruit tribesmen from the Khiva Khanate or attempt a seaborne evacuation by the naval flotilla originally intended for the joint attack on the port.

In reviewing the actions it was interesting to follow the effects achieved by local concentration of force on the battlefield, first by the Russian infantry in the centre then the Turks on their left, in both cases their assaults took a fair amount of punishment but overwhelming numbers won through and annihilated the opposition.

The terrain and obstacle modifiers are very simple - troops move at half their normal distance in all cases, for the players with a limited view of what is happening this can make things difficult to judge.  On several occasions troops emerging through woods were so disrupted that they needed to halt and reform their lines before advancing further.  The difficulty for the Russian units in the village on the left wing moving back to the centre across the bottleneck of a single narrow wooden bridge could easily have spelled disaster.

The final charge of the Russian cavalry against the Turkish infantry on the hill before the ruins was very much a "thin red line" moment and was a good illustration of the outcome one might expect when cavalry face a volley from a solid formed up rifle line.

Although the artillery didn't have a significant impact on the game, due to the dice modifiers, I could see that they would have a devastating effect on cavalry in a Charge of the Light Brigade scenario (compared to their effect against and infantry charge) due to the combination of the cavalry lower unit strength and the rule requiring units with 50% casualties to retire.

A good fast flowing game, simple rules ideal for playing by email or solo, intended for Colonial campaigns they are equally suitable for larger conflicts........I think I may try Crimean next or Russo Japanese or whatever.
Posted by Brian Carrick at 13:05