The Battle of Astrakhan (part 3) - A diversion from the Balkans

For those who prefer the game of Imagi-Nations this started out as a conflict between the Sublime Porte of the Levant and The Balkan League, sadly due to my general lack of imagination we soon reverted to the historical scenario of the somewhat RussoTurkish intrigues and incursions of the late 1800's. 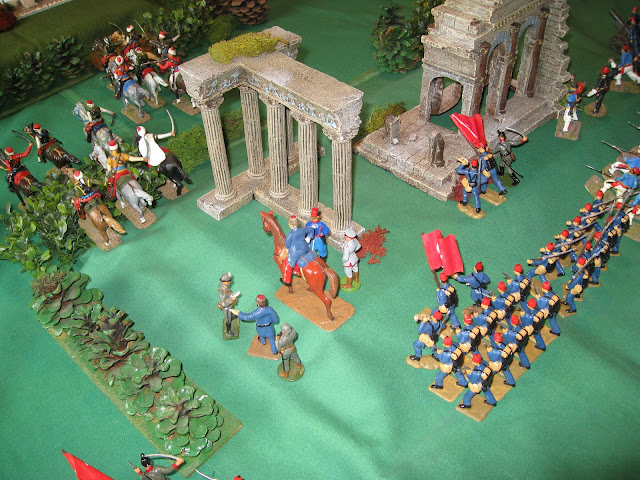 The Turks have set up a command post on the hill in the shelter of the ruins.

The Turks being concentrated to the west have begun a general advance of their entire line, their infantry command the heights, artillery cover the central plain between the river and the hills while their cavalry sweep into the valley. 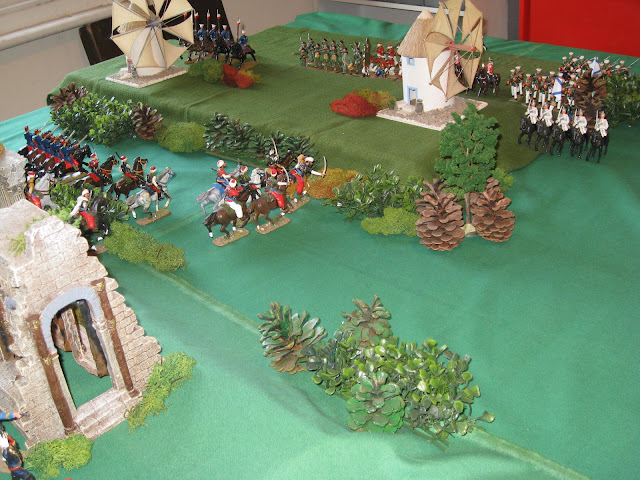 The Turkish cavalry thunder across the valley between the Ancient Temple and Windmill Hill unaware of what they may face ahead of them.....or the Cuirassiers rounding the hill to fall on their right flank.

The Russian right wing is painfully thin, two regiments of infantry and two of cavalry facing an assualt by nearly three times their number......but they don't know this! 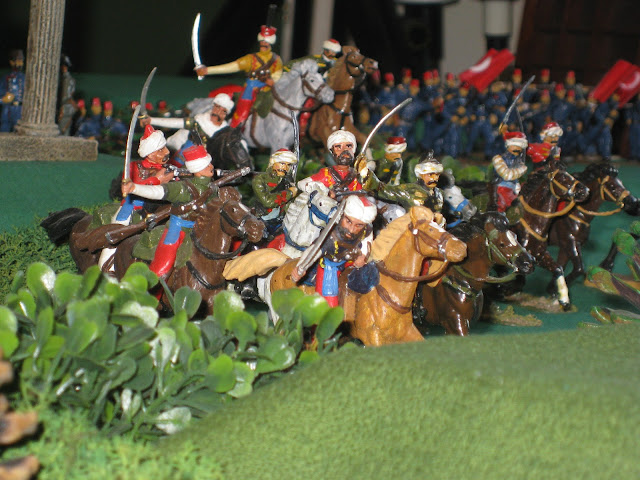 The Turkish light horse career on in their wild charge. 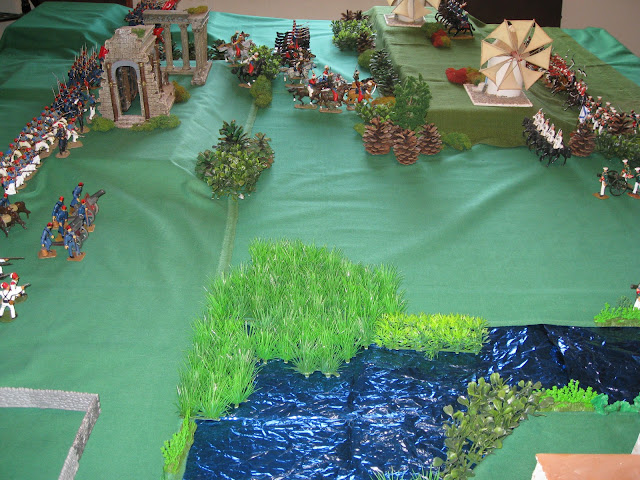 Overview of the  field at moves 3 and 4.

The umpires view, shared with you dear reader but denied to the two players who can only see what is visible from the position of their commander at table top level.  The result of this is that their ability to judge distances on the table, the effect of terrain on movement and the actual position of some of their troops starts to become impaired. 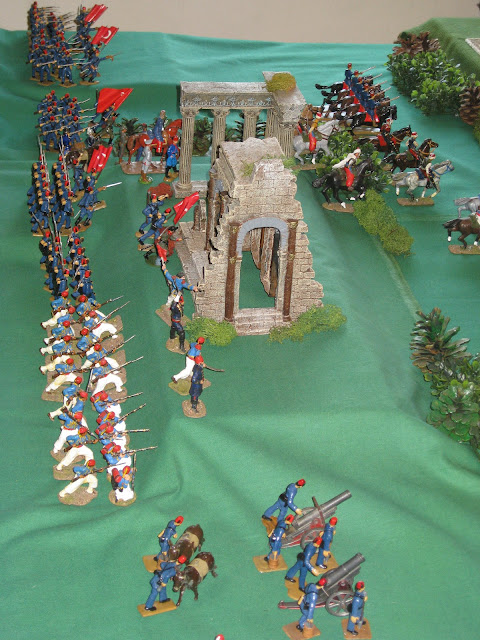 The impressive advance of the Turkish line, the mountain artillery deploy. 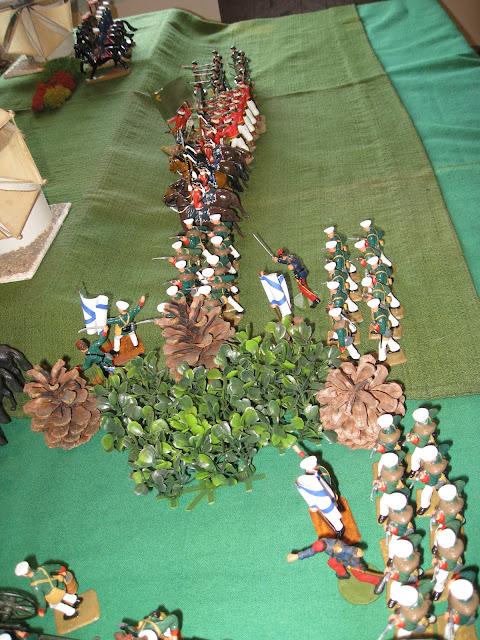 The Russian right ambles forward in the lee of the hill unaware of the full force of the assault about to break upon them. 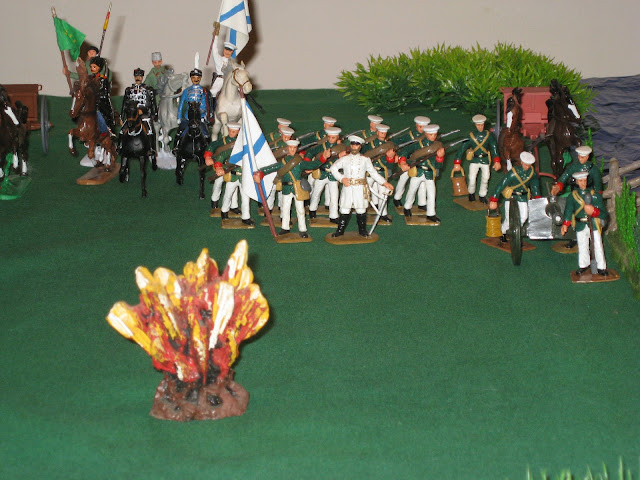 The Turkish artillery tries a ranging shot and finds it falls far short. 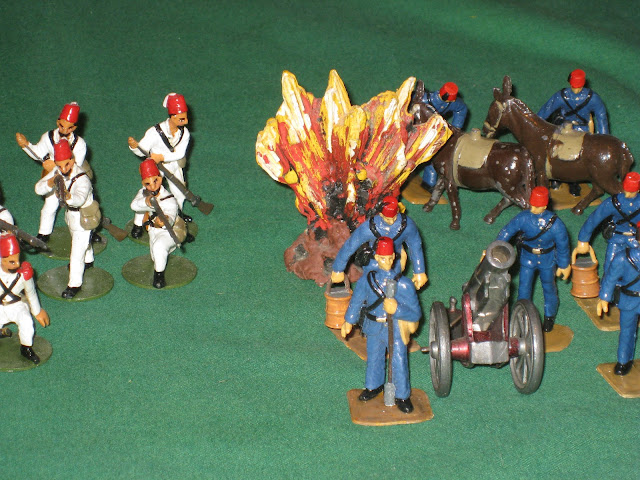 The Russian battery on the left replies and finds it's mark comfortably. 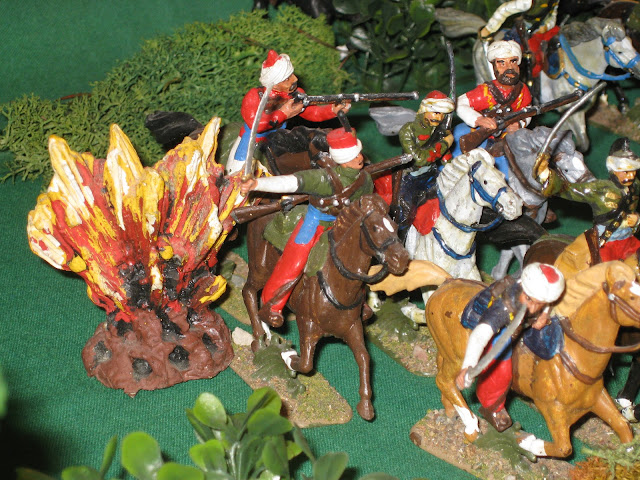 The second Russian battery in the centre on the line finds the range of the Turkish light horse with ease. 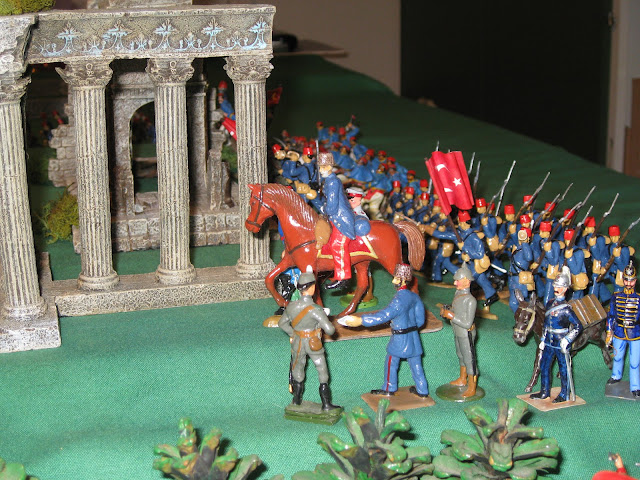 Commander of the Turkish forces, a Swiss emigre, Wolfgang Feyler with his Prussian advisors and the "Diplomatic Mission" Colonel Sharpe of the British Political Agency and Master Sergeant Harper of the United States Cavalry, with the "Diplomatic Bag". 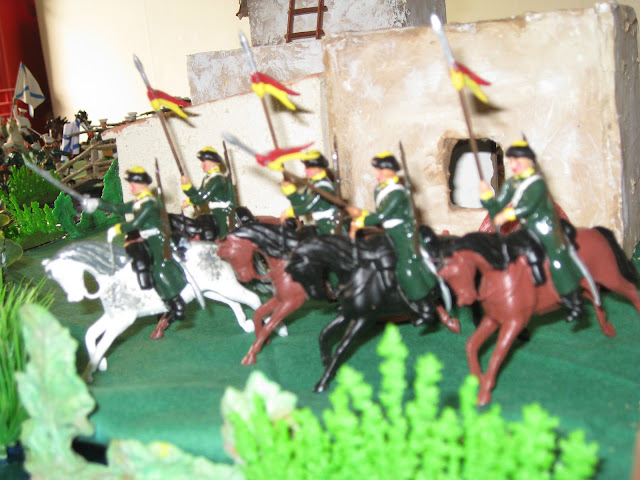 The Caucasian Cossacks leave the village and prepare to swim their horses across the river to rejoin the main body.

Having discovered that the village is unoccupied and there appear to be no enemy troops opposite their left wing the Russians rapidly recall their troops back to the centre while the gathering threat on their right builds ominously.  Is this a knee jerk reaction?  Is the action on the right a feint to draw off Russian troops from the left so that Turks concealed off table can swoop in and occupy the village?  Who knows? ...it's a risk. 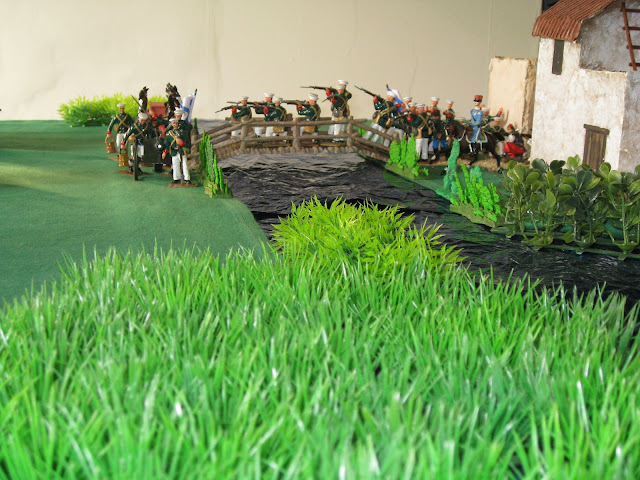 The Russians pour back over the bridge to rejoin the main body in the centre, the one small bridge proves to be a major problem causing a bottleneck as the men jostle with on another to get across. 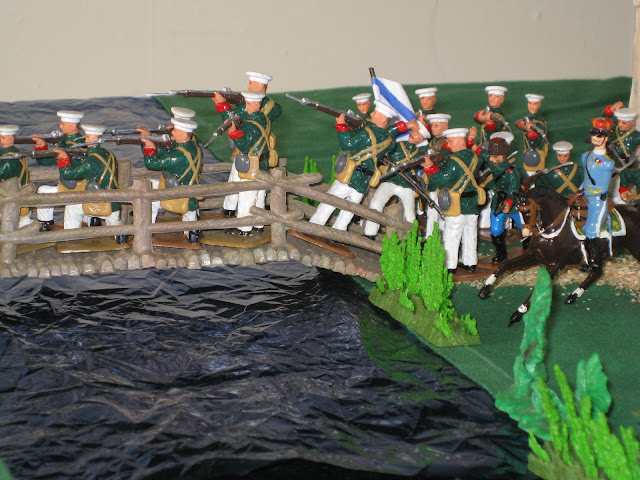 The old bridge creaks and threatens to colapse under the pounding of hobnailed boots as the Russian conscripts are driven on by the blows and curses of their officrs. 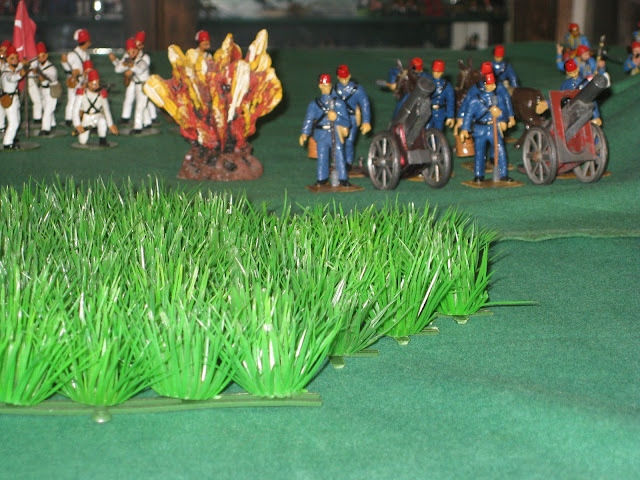 Desperately trying to buy time the Russian artillery on the left continues the counter battery work to deflect attention from the troops hurrying to get back to the main body. 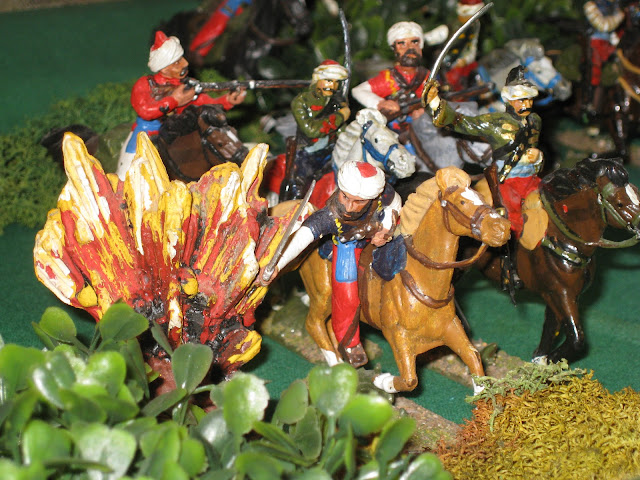 The Russian central battery continues to play on the Turkish cavalry charge trying to blunt the effect they will have when they hit the lightly held right wing.

Tomorrow - which way will the combat turn?
Posted by Brian Carrick at 20:33