Back around about 1960 toy manufacturer Cherilea acquired parts of it's competitor Hilco (Johillco) which was more or less imploding.  Among these assets were a small range of toy soldiers being marketed under the brand name Monarch, there were some modern marching Highland bandsmen, a set of three "Rob Roy" type Highland clansmen and this set of six Conquistadors which were designed by sculptor George Erik, a prolific talent probably best known for his work at the Spanish firm of REAMSA (Resinas Artificiales Moldeadas S.A. ) 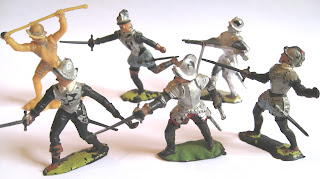 The pikeman (back left) in cream plastic is an earlier figure which carries the distinctive Hilco lozenge shaped indentation under the base, in this case it simply says ENGLAND, probably because it was made after the moulds were acquired by Cherilea.  I don't know if Hilco ever produced these figures and I don't think I have ever seen one actually marked Hilco.  The remaining five in black plastic are the more common Cherilea products sold in vast quantities through Woolworth's stores, they all have the simple blank circular indentation under the base common to Cherilea figures.

Above: the distinctive Hilco style indentation under the base.
In the summer of 1990 the brass moulds for all the Cherilea figures were owned by Triang and were due to be sold for scrap.  Giles Brown of Dorset Toy Soldiers got wind of this and in company with toy soldier enthusiast and author Andrew Rose set off with a truck for the Triang factory at Droylsden near Manchester to rescue as many as possible.  They loaded up as many bolsters as the truck's suspension could take, including the one for these Conquistadors and took them safely back to Dorset (a bolster is the steel plate that the individual brass moulds are mounted on for fitting to a plastic injection moulding machine, each bolster would typically hold six individual moulds and weigh as much as a large truck battery).  Giles phoned me to say he'd had to leave a lot of the moulds behind if I wanted to try and save them from the scrap merchants, I had just been made redundant so with time on my hands and money in my pocket I set off for the North, but that's another story for another day. 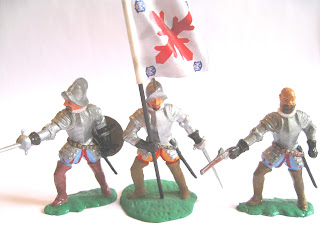 The three poses above were all made from the same standing swordsman with just a change of head or arms.
Back in Dorset Giles discovered that the bolsters would need a lot of work and investment before they could be brought back into production, fortunately he found a "white knight" in the form of Jamie Delson of The Toy Soldier Company who ordered sufficient of each range to justify the cost of the renovation work.  So that is how these fine toy soldiers came to be available to us once more as remoulds, and the great thing about remoulds is that you can convert them to your hearts content without feeling any guilt that you are destroying something old and original. 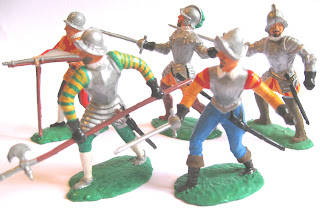 More simple conversions, the bases have been extended with Miliput to make them more stable, a laborious process which is not recommended.
Which brings me to the point of this post, I collect toy soldiers to play wargames with and for this purpose it's fine to have lots all in the same position but sometimes you want a little bit of variety and that's where converting comes in.  The examples in the two pics above are my own humble efforts and in each case are little more than an adjustment of head and arms.  The two pics below show the work of others more skillful than myself, some were made by the late George Weygand (who founded Maros Models) and others by Mike Ellis (who produced a range of figures under the Marksman Models name). 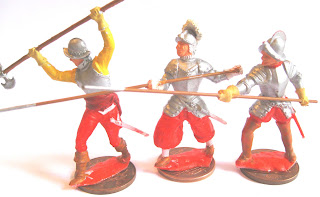 Sadly I can no longer remember who made what but I picked these up many years ago at a Plastic Warrior show and they have been languishing in a drawer until now awaiting completion.  You can never have too many pikemen for this period and it's amazing how much variety you can create when you start cutting figures at the waist and swapping the bits about as has happened here, note the use of a sash to hide the joins.  When it comes to conversions I have never had any qualms about copying other peoples ideas and am always flattered when others improve on my own.

My only contribution to the process has been to mount them on Tu'penny bits for stability, the original slim bases being annoyingly unfit for purpose.  Now gentle reader before you reach for the comment button to tell me that defacing the coin of the realm is a criminal offence let me assure that it is not, or at least not any more.  Some years ago I wrote to H.M. Treasury seeking clarification of this very point but in the time honoured practise of the Civil Service and perhaps a spirit of Non Culpa they chose to simply ignore me.  Undaunted I researched further (you can see this matter was causing me some vexation) and discovered that new legislation was passed in 1982 overturning the old rules and I am much relieved to know that I am not committing a felony.
Posted by Brian Carrick at 10:48