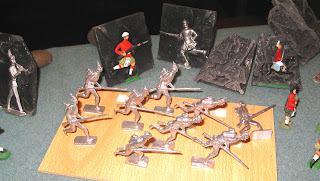 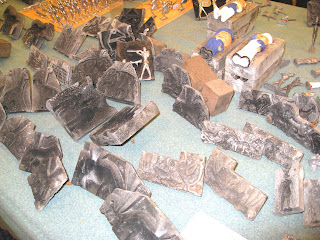 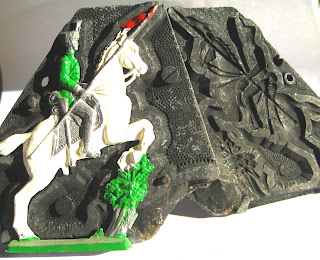 This two part mould for a Prussian Hussar on prancing horse is marked JDEAL, a German company actually called IDEAL, which made copies of Gebr. Schneider moulds.
New to the London Show was a chap called Mark Shilam who had a table full of old homecasting moulds and various castings for sale.  Mostly they were old Schneider Brothers hand clamp moulds but there were also quite a few rubber Prince August moulds for 54mm figures.  What interested me was that Mark told me his father used to make toy soldiers from the moulds and sell them commercially, I had heard that people used to do this but this was the first time I'd met someone who actually diid it.  Usually in the run up to Christmas his father would go into the garden shed for days at a time pouring the moulds and cleaning the castings, Mark was then a schoolboy and would spend all of his spare time in the evenings and weekends painting them, they would sell them in markets and anywhere else that people would take them.  Mark was selling everything up on behalf of his father who is now too old and unwell to continue the business.
On another stall I found a junk box with a variety of homecast figures going cheap: 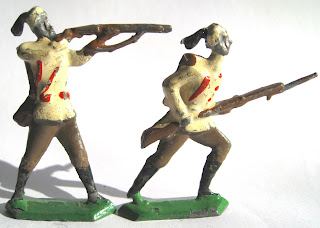 Two Turks but I don't know what the paint scheme is meant to represent, I think they will be taking a bath in paint stripper farily soon. 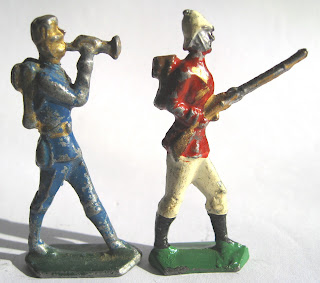 A French? bugler and British infantryman 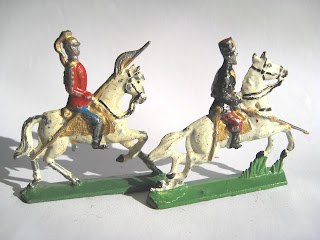 Finally an Uhlan and a Cossack.
Posted by Brian Carrick at 11:43