My final post from the London Show, three French plastic musketeers, the first made by JIM (Jouets Incassables en Matiere Plastique) the second and third are unknown - hopefully someone from the French forum soldat plastique 1/32 will be able to shed some light.  What I found interesting was that No.2 is the same figure as No. 3  but has his hat moulded as part of the original figure whereas the other has had it moulded separately and glued on afterwards, also their bases are very different. 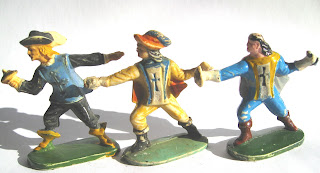 All three have lost their swords, which is a common enough problem with French figures which were mostly made in hard plastics or acetate rather than the more supple poly plastics used in the UK and USA.  The JIM figure originally had a sword moulded in plastic but the other two originally had a piece of metal wire to represent a sword.  I will probably repair all three with a length of wire and I'm tempted to repaint them but I quite like their "shabby chic" look and besides my painting pie is large enough already without adding to it.
Posted by Brian Carrick at 06:31